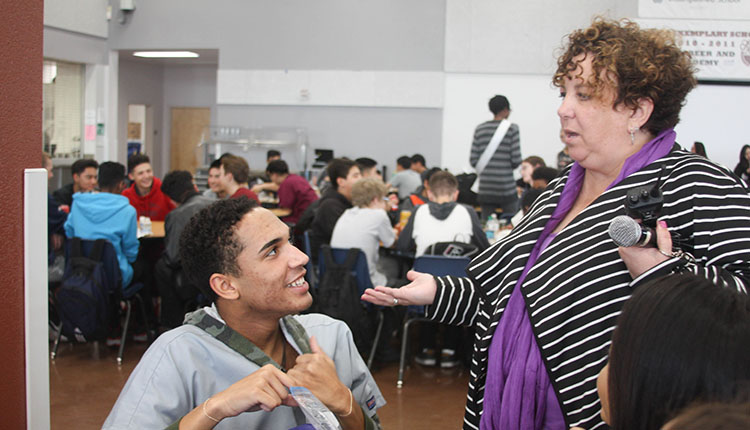 After the recent promotion of Dean Sherrae Nelson, the administration began to look for a new dean to fill her position. The process began in late Jan. and will conclude once the district has appointed one of the finalists submitted by Principal Donna Levy.

“Hiring a new dean is a very long and strenuous process,” Principal Donna Levy said. “There are certain prescribed procedures that we have to follow and often times it takes a very long time.”

To qualify for the position, a licensed teacher must first complete their masters in education leadership from an accredited university. Then they have to apply, be accepted and complete the CCSD Leadership Preparatory Academy.

After an administrator is promoted or transfers, Levy has to notify Human Resources of the open position. The process includes posting the position on InterAct and waiting for potential employees to add their name to a list which is sent to Levy for review.

“I hope they’re just as understanding as Ms. Nelson was and they appreciate what each of us students in our program areas do,” senior Kenny Weeks said.

With this process completed, the current administration must complete the duties of that position until it is filled. For example, Dean James Campbell has had to take over activities.

“We don’t go home ever,” Assistant Principal Trish Taylor said. “It’s hard because Ms. Nelson supervised around 22 teachers and the entire math and science department, and she handled discipline, so the burden has really fallen to the other three of us for the last six weeks.”

Nelson was promoted to Assistant Principal at Canarelli Middle School where she hopes to teach students about CTE programs and PBLs.

Once the appointment is made by the district, Levy will be notified and a start date for the new administrator will be decided.

“When they first come, we’ll announce it at lunch,” Taylor said. “We’ll also walk the campus with them and introduce them. We’re hoping it’s announced officially by the district by the end of the week.”