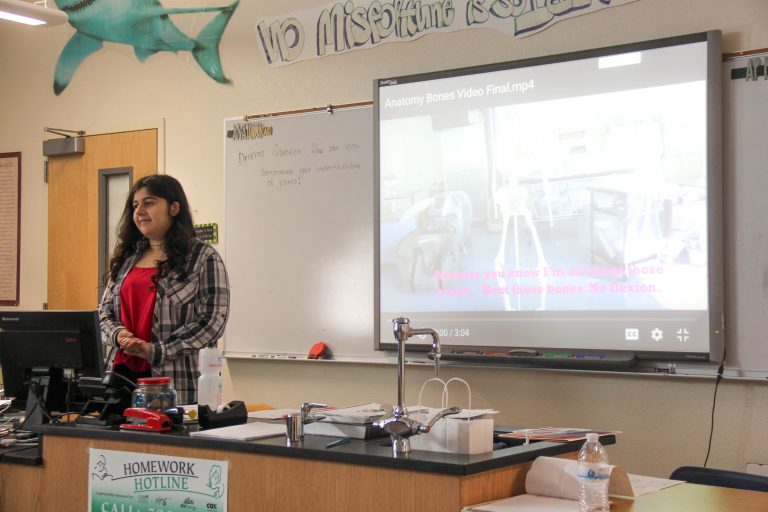 Starting today, Anatomy and Physiology students presented their skeletal system music videos they began creating prior to Fall Break. The students were required to parody a song by listing the bones in the body and adding visuals to go along with the lyrics.

“I liked the freedom we were given in order to complete the project,” senior Cameron Tennies said. “However, I wished we were allowed to take home a set of bones to show obscure or small bones accurately. I could improve my project by singing as great as Mariah Carey.”

Students split into groups of three and wrote lyrics based around 41 major bones, including those located in the skull, arms and legs. The class then filmed music videos to go along with the lyrics.

During her second year of teaching Anatomy and Physiology teacher, Ms. Jennifer Conder, has assigned the Skeletal System PBL. The project has evolved over the years; initially, students had to create their own songs as opposed to rewriting an existing song.

“The students have a big range of options about how they approach this project,” Conder said. “When I first started doing this PBL, I had the students create their own song which was a lot more difficult. It was a bumpy ride for the students and I during that project and it took much longer than expected.”

Instead of giving worksheets and notes to the students, Conder believes a PBL more effectively engages students on the topic.

“My hope at the end of this project is my students will be able to identify all the bones in the body,” Conder said. “That was my main goal of this project and my hope is that the students learned more about the body while having a fun and interactive PBL.”