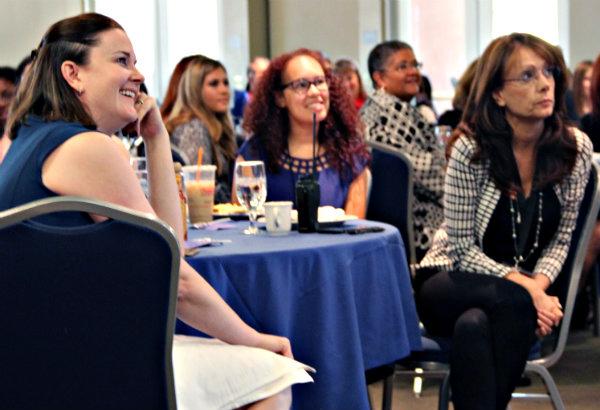 Student Council Adviser Mrs. Miriya Julian and Principal Donna Levi listen to guest speaker at the NASC annual breakfast. the guest speaker Jim Livengood spoke to other student body presidents and administrators. "At the breakfast, the State President shares the State Board goals for the year with all of the people who attend so that way it is communicated directly to the poeple who are in charge of the schools' student council," junior Lindsey Zangler said.

The annual breakfast for all student body presidents and advisers from across the Las Vegas Valley took place on Sept. 29 from 7:30 a.m. to 9 a.m. in the Coyote Ballroom.

“Every year, the Southern Nevada schools within the Nevada Association of Student Councils (NASC) host a president’s breakfast and typically who comes from each high school is the student body president, the student council adviser and an administrator,” Student Council Adviser Mrs. Miriya Julian said.

The purpose of the breakfast was to bring every student council together to discuss meeting dates, conferences such as Mid Level (the middle school leadership conference), which Southwest is hosting, the Southern Zone conference and other special events.

“It’s kind of like a kick-off meeting. Southwest has volunteered to host the breakfast for the past four years. We also had an inspirational speaker, Jim Livengood, who talked about his upbringing and the values that his parents taught him and how they relate to the week of respect,” Student Body President Rachel Martinez said.

“We have brother and sister schools that are assigned to us at the beginning of the year and basically we share ideas that have been successful at our school so they can try it at their’s. Also, we can help one another whether it’s borrowing equipment, asking for volunteers, getting donations, etc. NASC is a big student council family,” Mayor said.