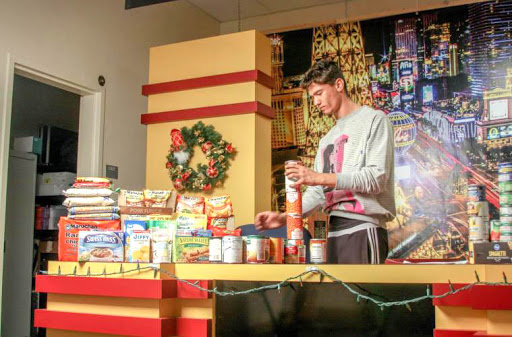 The annual canned food drive continues as StuCo encourages students to donate to benefit the Project 150 food shelter. By donating canned food, high school students who don’t have access to food during the break will be provided with meals and snacks.

“Donating food to people that don’t really have any is really essential because they can actually eat and have dinner for once,” StuCo member Daniel Cabrera said. “It’s kind of sad that a lot of people don’t want to participate and give back to the community. It’s something that could really impact someone’s life.”

Non-perishable food items will be accepted; however, the food drive strives for canned foods but are not limited to items such as portable foods, fruit cups or Ramen.

“We put all the food in the studio because we wanted people to see how much they’ve been giving, outside of  the little box in the classroom,” Mr. Tom Rizzo, video production teacher, said. “A couple years ago we decided to place the cans in the studio so that as people watch the morning show they can see how much stuff is coming in.”

Project 150 is a non-profit organization focuses on helping homeless, displaced and disadvantaged high school students stay in school and graduate.

“I’ve gone to multiple grocery stores to get canned food and so far I’ve donated over 300 cans,” senior Bryce Nass said. “My family and I like to do what we can to help people in need and we don’t really have the time to go out to shelters and things like that and physically help so this gives us an opportunity to help in other ways.”

Every 7th period class is competing to donate the most canned items to win; however, the drive ends until Dec. 15 where the winning class will receive a pizza and ice cream party.

“This is the time of year where it’s really made obvious that there are family’s and teens who don’t have a Christmas holiday or any holidays,” Miriya Julian, Student council advisor, said. “It’s really nice to be able to help someone else because to you it might just seem like you took a couple canned food items from the house but to these kids its a meal, it applies a resemblance of a normal holiday. Maybe all they have this year is a holiday meal with their family, no gifts but at least its something.”