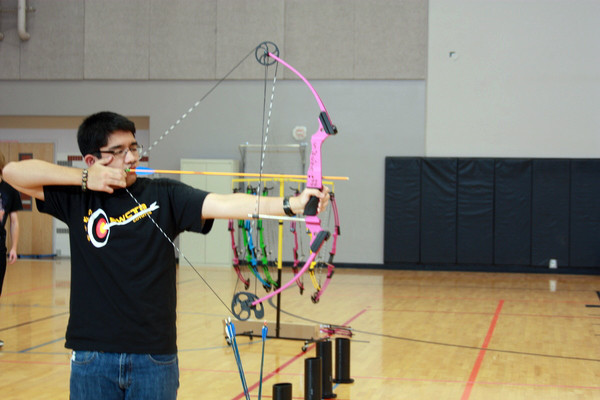 Kevin Rodriguez, freshman, is practicing the proper way to draw the bow before releasing his arrow.
Photo Credit: Raymond Tang

The Archery Club is participating in the upcoming National Archery State Tournament at the South Point Hotel and Casino on Feb. 7. Many schools have entered the tournament such as Churchill County HS, who perform well every year as the top scoring high school male, top scoring middle school participant and top scoring teacher in 2009 and 2010.

“I can’t wait to participate in the competition and compete with people from different schools,” freshman Jaden Bailey said.

During the tournament, there will be four different flights, or rounds, where as many as 60 students shoot together in a large arena, and each member will be assigned to one of four separate flights. Each student will shoot 15 arrows from 10 meters away, and 15 arrows from 15 meters away.

“I’m really excited to compete in the competition since I get to skip school and show off to everyone including my parents,”  freshman Max Mar said.

“I am looking forward to the day of the competition to see how we compare to the other schools in Nevada. It is also a fun time for the students to get to meet other students from around our state with the same interest,” Archery Club Adviser Coach Ann Kalenowicz said.

The Archery Club meets every Monday from 2 p.m. – 4 p.m. to practice in the gymnasium.