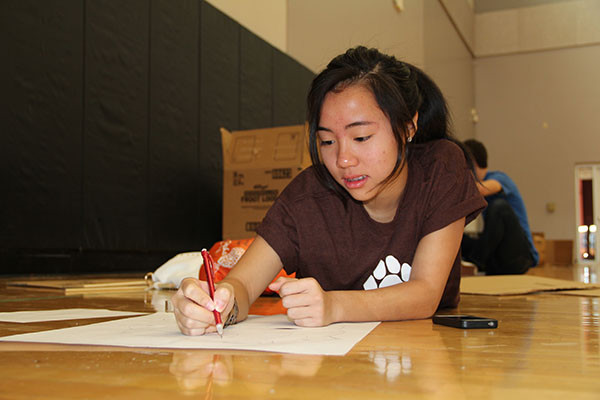 In order to properly draw her sketch work, sophomore Xueying Zheng lies down in the gym with her other teammates. She represented her major by producing an organ themed arcade game. "I had an amazing group and this PBL was the most fun. Although, our project broke frequently and we had to fix it, we won!," Zheng said.
Photo Credit: Tamara Navarro

In order to properly draw her sketch work, sophomore Xueying Zheng lies down in the gym with her other teammates. She represented her major by producing an organ themed arcade game. "I had an amazing group and this PBL was the most fun. Although, our project broke frequently and we had to fix it, we won!," Zheng said.
Photo Credit: Tamara Navarro 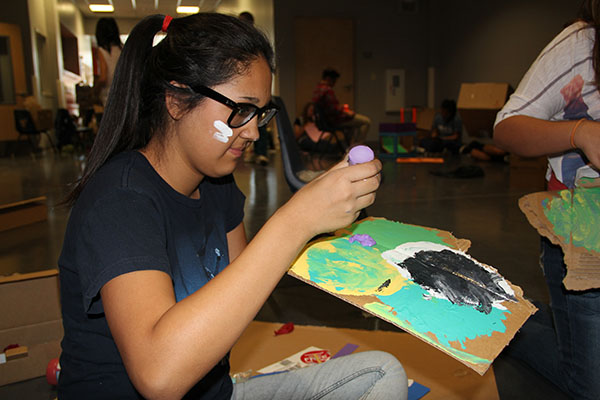 Isabella Delarosa, freshman, adds a new color to her paint pallette to create new colors and shades to paint her arcade game. “Caine’s Arcade is so cute! I loved designing and making it appealing for others to look at and want to play,” Delarosa said. 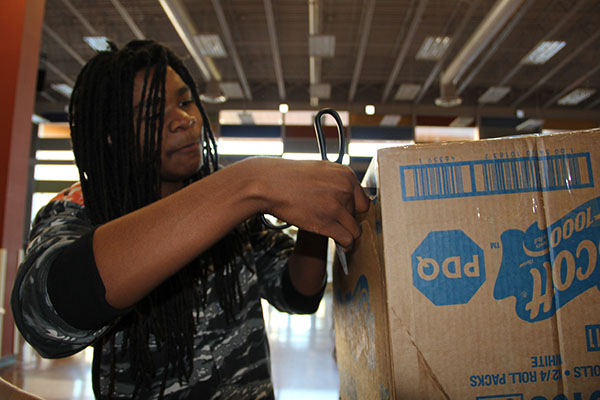 Within the first hour of the second day of PBL, junior Jyari Martin measures and then adjusts the size of his cardboard to fit his game. He worked with his other teammates to incorporate the web design major into their arcade game. "It was an interesting PBL and it was quite fun meeting people from different grade levels," Martin said. 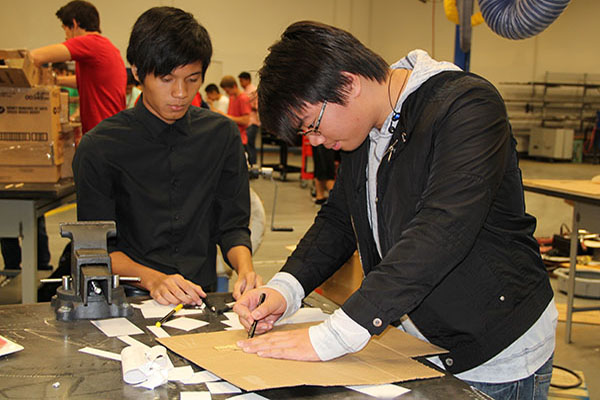 Well ahead of schedule on the second day of the PBL challenge, sophomores Tyler Antonio and Karel Saquing lacerate cardboard cutouts of car parts for their project. Their arcade game was a tire change inspired assembly activity, including a mini car with paper engines. "This PBL had teachers only giving us the information and we were on our own. It was up to us to decide what to do and it was a great experience," Saquing said.

Students were challenged to channel their creative energy into constructing an arcade game using only cardboard and other provided materials to create an arcade game inspired by their program area.

“Caine’s Arcade was a unique way to get students to utilize all their tenets without them even noticing it,” Community Partnership Coordinator Mr. Craig Statucki said.

Caine’s Arcade, which was founded in mid-2011, has inspired children and teens from around the world to create a cardboard arcade game for other people to play and enjoy.

“This PBL taught me two important things. That it is important to have teamwork, and that you need to have a good structure for the base of your game,” sophomore Hye Woo said.

The main goals for students was to incorporate their  major into their game, promote teamwork and collaboration, and demonstrate the learning relationship between core academics and career and technical education in their design. All games were displayed at open house on Oct. 3 for teachers and students to play.

“I didn’t realize how important it was to have good teamwork and collaboration skills before this PBL,” senior Reynson Bali said.

The created games must accept coins, and a winner will be selected for each classroom by their appointed senior leader. The game that won best overall was “Kaine’s Arcade,” created by Polina Frolova, Skyler Visser, Anthony Palacios, Kellisa Shirane, and Ashley Decastro, a stove game that represented the culinary program.

“The goal of our group was to incorporate the nature of fun and creativity into our game, and to represent the fashion design program, we applied design principles,”  junior Meya Holmes said.

Also, this is the first Fall PBL in two years, and students were required to create an invention using their resources and knowledge.

“We brought back the Fall PBL so that we could do something similar to Caine’s Arcade,” Principal Felicia Nemcek said.

“It was nice to work with other students in my program, and I admit it was a lot easier that way. I hope we do something like this again next PBL,” sophomore Brittany Grossi said.

After the documentary about Caine’s Arcade went viral, 9 year old Caine Monroy served tens of thousands of customers from around the world. However, after two years of running the arcade, Monroy has since retired and now dreams to open up a bike shop.

“Caine has definitely showed us as students a better way to learn and have fun, and still be involved at the same time,” junior Darren Wong said.