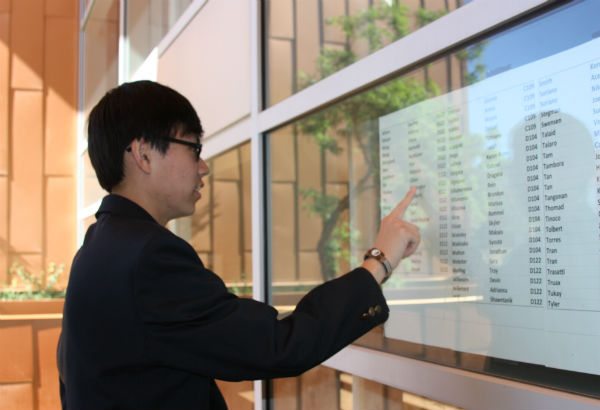 In order to know what room he is testing junior Mingson Lau checks the papers posted outside the cafeteria. Students are not allowed to leave their designated testing room until 12 p.m. "These tests are really important for college, so I'm really happy that the school district decided to pay for our ACTs," Lau said. Photo Credit: Acel Soriano

“I was really worried about not finishing because of the time for each of the sections. It was really hard to focus during the first section, but after the break my mind was ready to take the rest of the test,” junior Khloe Faria said.

All necessary testing materials were provided to the students. Backpacks and cellular devices, if brought, were held until the testing session concludes.

“Five hours is a long time and I was worried about staying focused. This morning I actually ate breakfast because there was no food allowed in the testing room and it really helped me power through the exam,” junior Cheyenne Folias said.

In addition, if students were absent during today day, they will have to make up the test on May 12.

“The ACTs were definitely not what I expected. The test would be fairly easy if more time was allowed. I didn’t expect the time to go by so fast and honestly, it was pretty hard because of that,” junior Xueying Zheng said.