CCSD Board of Trustees passes revised regulation 5157, permitting caffeine on campus The Student Wellness regulation will be discussed at a public meeting on May 28 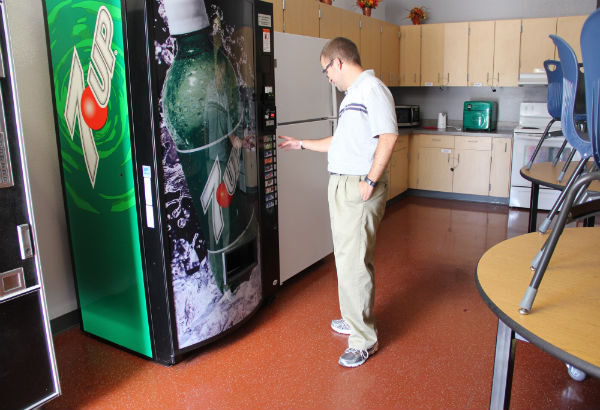 Entertainment Engineering Program Leader (PL) contemplates which soda pop to purchase from the vending machine in the teacher's lounge room. As a person who drinks caffeine on a regular basis, Locklear supports the revised regulation. "Honestly, I think the students are old enough to make responsible decisions regarding caffeine. As long as it's in moderation, they're okay," Locklear said.
Photo Credit: Jen Chiang

The Clark County Board of School Trustees approved revisions to Regulation 5157, Student Wellness, on April 23. The proposal, which is available for public viewing in the Office of the Superintendent of School, states that schools are now permitted to sell caffeine.

“I think this new regulation is going to give us a lot of different options when choosing something to drink. The only thing I’m worried about is if there will be more rules made against having those drinks in the classroom,” senior Jazmine Rodriz said.

Revised Section III of Regulation 5157 declares that while elementary and middle schools must only serve non-carbonated and caffeine-free beverages, “caffeine is permitted at the high school level at the discretion of the principal upon approval by the Instruction Unit.”

“To be honest, I need caffeine to be able to function in my first class and be productive. This is a great change,” senior Rediet Ayele said.

The revised regulation specifies that all condiments, foods and beverages sold or given away to students must meet the policy’s nutrient standards, which can be referred to in Sections I and II in the notice of intent. Also, a list of the approved foods and beverages by the CCSD’s Food Service Department’s Registered Dietician will be posted on their website.

“I’m perfectly fine with this change because caffeine like tea or coffee doesn’t really give me a boost or anything,” junior Makaio Wakeley said.

According to the regulation, Clark County School District (CCSD) is committed to providing an environment in which students can make healthy food choices and have opportunities to be physically active.

“I feel that caffeine in moderation won’t hurt the students. We haven’t finalized any plans yet, but we’re thinking about selling soda pops and bottled Frappuccinos in the student store,” Principal Donna Levy said.

The previous regulation stated that only caffeinated beverages of naturally occurring caffeine in cocoa with less than 20 mg. per two ounces were allowed to be given away or sold during the school day.

“I think the school would be split on enjoying it [caffeinated beverages]. I personally wouldn’t buy them, but I’m sure others would love it,” sophomore Blake Whittlesy said.

For more information on the regulation, a public meeting will be held on May 28 at 4 p.m. in the Board Room of CCSD.

“I’m really fond of the idea of selling caffeinated drinks considering I drink coffee, but then I feel that depending on coffee can’t be beneficial for a teen’s health,” sophomore Christine Herrera said.