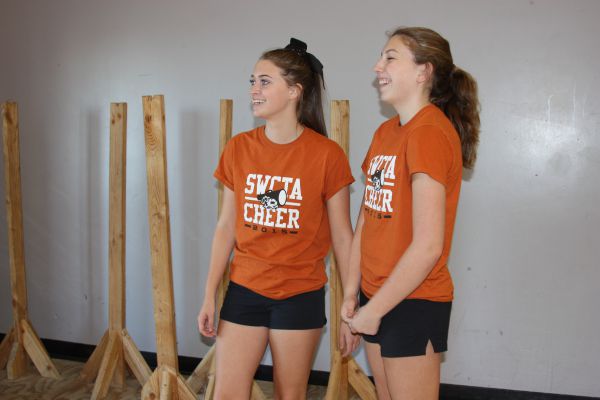 Sophomores Lauren Petrosky and Moira Johnson lead a group of three female participants at the second try out practice on Sep. 8 in the gym.
Photo Credit: Jen Chiang

In order to fill seven more spots for the team, the Cheer Club hosted a second tryout on Sep. 11 from 2 p.m. to 3:30 p.m. in the gym. All students, male or female, were eligible.

“Anybody with a desire can be a part of cheer. There are no prerequisites, just young men and women with a strong character,” Coach Cindi Chang said.

The Cheer Club currently has 11 members, but would like to recruit more members onto the team for the upcoming competition season this spring. The team will begin rehearsing competition choreography in Nov.

“I hope that this season we grow as a team and improve,” sophomore Moira Johnson said.

The 2014-2015 Cheer Club had four boys, but since graduation, they have not been able to find male students to fill these spots.

“Having guys last year made our team great and definitely added many new skills that we could use this year as well. They brought a lot of momentum and strength into our stunting skills,” sophomore Alexandra Canaveral said.

If they are unable to find new cheerleaders, the team will be ineligible to compete in certain competitions.

“The team is already small to begin with and we need a certain amount of people on the cheer team in order for us to compete in competitions so that’s why we needed to replace those six who left,” sophomore Trina Lehner said.