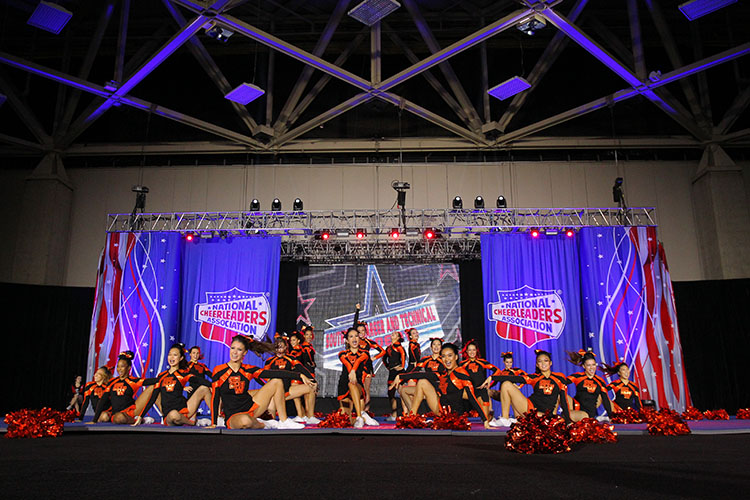 After earning a bid at the National Cheerleader’s Association summer camp in Utah, the Cheer Club traveled to Dallas, Texas last week for Nationals.

“Being able to go to nationals meant a lot to me,” Cheer Club member Melissa Yelverton said. “It meant that we worked that hard and pushed ourselves that much to even qualify.”

“I felt butterflies in my stomach the whole way through,” Cheer Club member Alexandra Canaveral said. “There was so much adrenaline and the power we had in the routine. By far, I have never been more excited to cheer at the largest championship cheer competition in the world.”

“It was a great honor to participate in this {competition}, especially how hard we worked on our routine,” Cheer Club member Nina Perry said. “When we heard our school’s name called it was super emotional because not many people get to have this kind of experience.”

Apart from competing, the cheer team was able to sightsee–one of them being the Sixth Floor Museum.

“We were able to go the museum to learn about legacy President John F. Kennedy lived,” Yelverton said. “I was super fascinated because I had a better insight on his assassination and the background that took place in that time. We even got to see the exact place where Lee Harvey Oswald aimed his gun. I didn’t have much knowledge on it prior to visiting the museum, so being in the actual library really sparked my interest.”

As for upcoming competitions, the next one will be held on Feb. 4 at Coronado High School.

“The team is able gain confidence in doing what we love and having the motivation to keep going and to learn new things,” captain Rebekah Chang said. “We were able to bond more with one another because in the moments before we went on stage to perform, we realized that we wouldn’t be here if it weren’t for each one of us. We knew that we needed each other and that made us grow closer.”