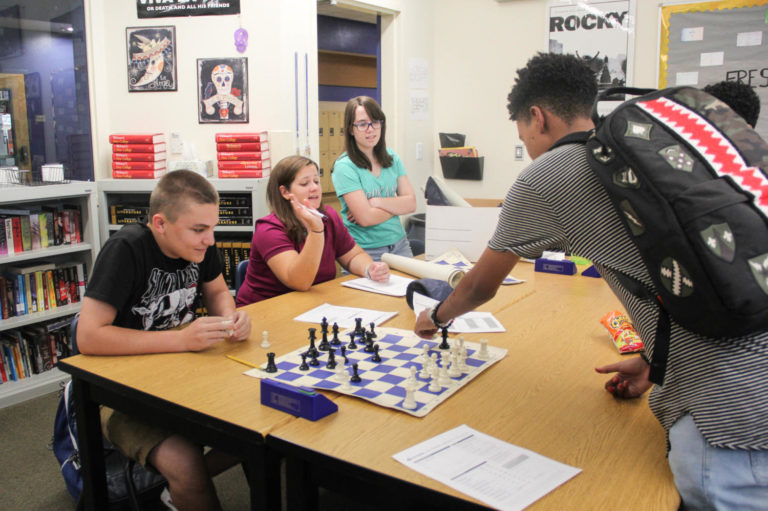 Playing a game of chess, junior Sam Cox and sophomore Samir Waber compete against each other. Chess Club began meeting on the second week of school. “If the club has more than five members than we would be able to choose the best five members that week and switch through them,” Chess Club adviser Anne Kalenowicz said. Photo Credit: Cassie Valdez

With only five members, Chess Club is hoping to recruit new players for this season. Meetings are every Tuesday after school in room C124 from 2-4 p.m.

“In the beginning, we only had two people attend the first meeting, so I tried to convince some people in the hallway to join,” Physical Education teacher Anne Kalenowicz said.

Last year, there were five members in the club. Although a team of five members is not required to compete against other schools, a team of less would have to forfeit the rounds that couldn’t be played.

“During a competition, there are five matches, one for each player on a team, and member isa arranged from one to five—with one being the strongest player on the team,” sophomore Sirre Taal said. “Players of equal ranking are paired together and the matches are timed.”

Currently, Chess Club members are trying to recruit by word of mouth.

“Chess is a great game to exercise your mind to get ready for school,” Waber said. “You can learn a lot [more] from Chess than you can in other activities.”

Students who are interested in joining can pick up an application from Kalenowicz at the next Chess Club meeting or before and after school. The first match will be held in C124 on Sept. 19. Members will compete against the Chess Club from Basic Academy of International Studies.

“People should join Chess Club to help them improve their analytical skills while having fun,” junior Sam Cox said. “We can train together and defeat other schools at the competitions to prove that we are the best.”