Club Preview: A look into the week of Feb. 10 Robotics, DECA, Dance Club 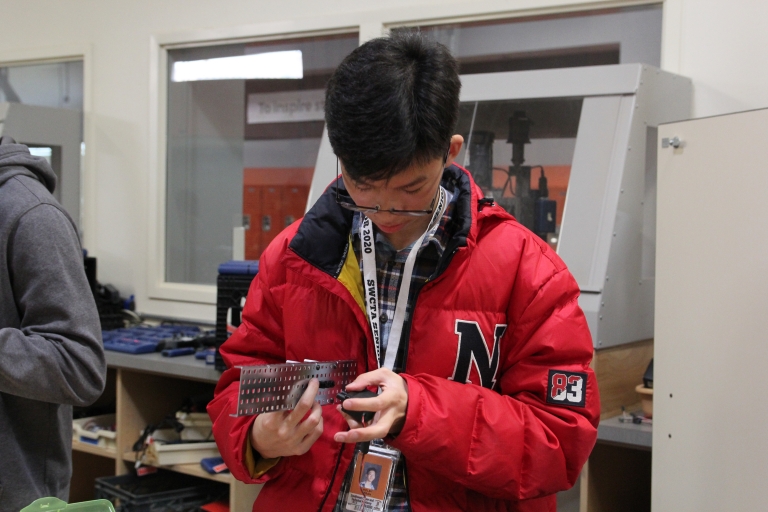 As he connects the VEX parts together, senior Kolby Tran finishes assembling a piece to add to the robot. Robotics members started to assemble their team robot for their competition season. “Since this is my last year and the last year with students that founded the club, we hope to do our best in our competition with our new robot,” Tran said.

Finalizing the physical robot, Robotics members are starting to work on coding and testing their machine.

“The goal we have is to finish the physical robot,” Robotics member Justin Casuga said. “It’s very likely to happen [soon seeing] as many teams are finalizing their creations and are coming to the part where we can strap everything together.”

While half of the members will work on coding and testing, the rest will be preparing their spirit items such as shirts, pins, mascots and cheers.

“At competition, there is a reward for team spirit and we want to win that award by creating a drum line with our spirit team,” Casuga said. “No one so far has done this in my three years of competing, so I believe this will let us have an edge on other teams with huge membership.”

From Feb. 9-12, DECA members will be attending their state competition at the Rio All-Suites Hotel and Casino. At state, members will compete in competitive categories and attend workshops.

“I’m feeling very nervous, but excited,” DECA President Jocelyn Miller said. “I’m nervous for the actual competition part, since I haven’t had as much time to prepare as I would like. On the other hand, I’m excited for all the fun that usually comes with it, like the activities planned or people there.”

After state, DECA members will focus on their plans for next year, including their officer elections and reflections.

“I’m most excited about getting a new officer team,” Miller said. “I can’t wait to see who runs and who I will be passing the club onto, since it’s my last year.”

Finishing their Beyoncé inspired choreography, Dance Club will be practicing their routines for the next few weeks.

“So far everyone loves the Beyoncé theme surprisingly, I’m the one that doesn’t,” Dance Club President Kennedy Nelson said. “I’m not a huge Beyoncé fan, but her music for the routine I like. Everyone’s doing pretty well with the choreography especially since I haven’t been able to be there always to teach it.”

Members will be practicing to qualify for the annual Coyote Games assembly.

“Since it may be our first performance, I’m honestly pretty excited,” Nelson said. “We have so many aspects of our routine that will for sure be very entertaining. I also want to show everyone how good our members have gotten. They’ve all improved so much and it really shows in their dancing. We’ve also grown a lot closer as a club so it’s even more fun performing together.”