Club Preview: A look into the week of Oct. 14 FCCLA, Poly Club, DECA 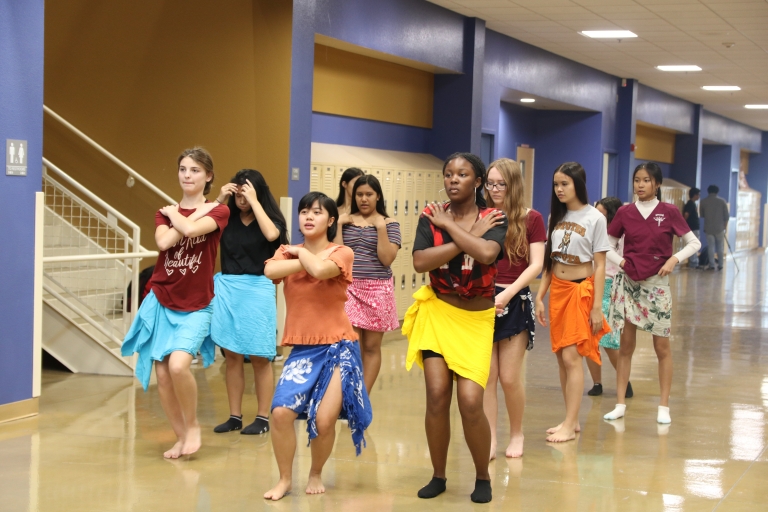 Teaching the choreography, Poly Club President Ghyanni Ferraer practices for DA vs PA. Poly Club choreographed their own performance for the game. “We love to teach our girls new dances so that way when there are assemblies we are ready to perform,” Ferraer said. Photo Credit: Ariana Stanciu

Since meeting their goal for the pizza fundraiser, FCCLA will be focusing on their state competitions.

“I think this year is a better year than the previous ones because [the board] came into it with a fully realized vision of what we want,” senior Cyncir Pollard said.

Each member of the club picked the two events they will be participating in at state.

“I am most excited to see how everyone’s skills have improved since last time, especially my own,” Pollard said. “I always try to compete with myself, but I feel like in previous years I wasn’t where I wanted to be or where I should have been.”

After their Homecoming halftime show performance, Poly Club will be choreographing a new dance.

“This year our group is smaller and that means more time to get to know my girls, we will be having better costumes and maintaining the ohana aspect in our club,” Poly Club President Ghyanni Ferraer said.

The new dance will be performed at future assemblies and events.

“I am excited to get closer to my girls,” Ferraer said. “It is my last year as president so I want to spend every single moment getting to know them and doing fun activities as an ohana.”

To welcome new and old members, DECA will be hosting their annual installation banquet, where they will eat and play games.

“I’m excited to see the members excited for the year and the games,” DECA President Jocelyn Miller said. “It’s a good way to get the spirits up for old members and welcome new members.”

Although the banquet is their current priority, DECA has also been preparing for the tournament by playing games.

“A lot of people are also excited for the tournament we compete in in February,” Miller said. “We played a game of jeopardy to give the members a general feel for the type of questions on the test at the tournament.”