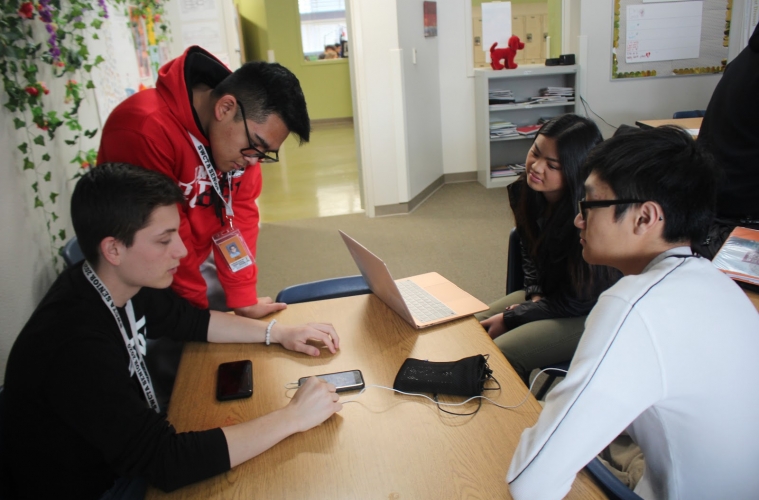 Practicing for their dinner party, seniors Daphne Dimutulac, Noah Flores, Jacob Crayne and Nathan Chau create a plan about what they’re talking about. Students in Communications 102 picked conflict roles for the dinner party. “Preparing to be a mediator is hard because I have to put my bias away and really focus on solving the problem at hand, no matter who I agree with,” Crayne said. Photo Credit: Grinesa Bajrami

In order to learn about the different types of conflict styles, students in Henry Castillo’s Communications 102 classes are reserving tables for a ‘dinner party’ from Feb. 19-24.

“Rather than throwing a quiz at them, I want my students to interact with common conflict styles in a meaningful way,” Castillo said. “Conflict is natural; it should be expected and not suppressed.”

Organized in groups of five to six, each student was assigned a particular conflict type, ranging from mediator, instigator, intellectual, sheepish and passive-aggressive.

“For my character, I got the sheepish person, which should be fun,” senior Jaden Dickson said. “It is different than my usual conflict style, as I usually want to deal with any issues right away, rather than shying away from the issue, but it should be fun to do something different.”

Each group will be provided a hypothetical scenario to argue upon. Students will have a total of 15 minutes to argue and five minutes to resolve the conflict. As the group argues, the rest of the class will decide which character was the best at settling the problem.

“I think that this project would be beneficial in a sense that it will help me understand how to resolve conflicts and how to handle different types of conflict styles of people in general,” senior Dailuaine Esguerra said. “I’m most excited to see how this project will unravel in my group and also others’ groups.”

After the dinner party, students will focus on relationships with activities such as speed dating.

“By having students eat and engage in controlled conflict settings, I’m able to simulate a relatively realistic experience for them,” Castillo said. “Besides, it’s always fun to argue, chat and eat.”