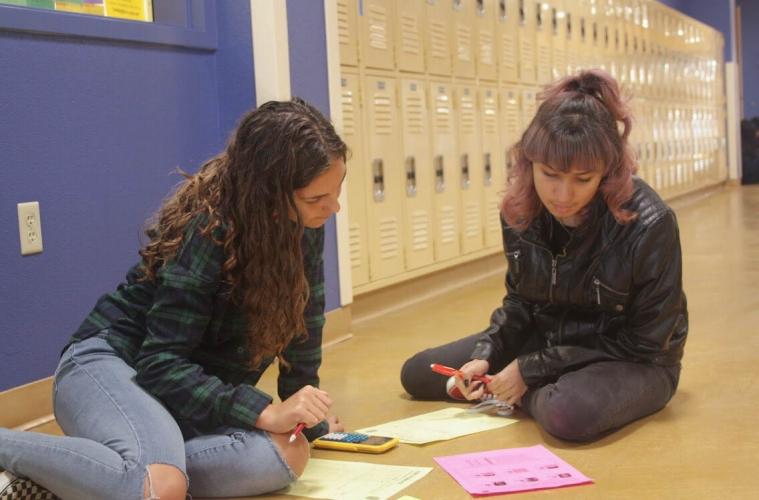 To find who Calcuu Paraboloid is, sophomore McKenna Thayer and Jocelyn Peralta work together to solve a math problem. Algebra Instructor Tawanna Ervin hosted a crime investigation scenario in the halls to allow students to study for their upcoming test. “I honestly did not expect the questions to be so difficult,” Thayer said. “I think because they were word problems they were harder to understand. Hopefully with that practice I will be ready for the test.” Photo credit: Eriyale Williams

To prepare students for the upcoming factoring and quadratics test, Algebra II teacher Tawanna Ervin organized a mock crime investigation where students were tasked with solving six equations, which were dispersed across campus.

“We were each given a partner and a set of rooms to find clues,” sophomore Jayde Spiegel said. “On the door of each room we found a clue that incorporated a math problem. Once we solved it, we moved on to the next. After solving each problem we could figure out the guilty suspect.”

The assignment was centered around a criminal named Calcuu Paraboloid who wanted to destroy all the calculators in the world. Grouped in pairs, each equation solved by students would be a step in stopping Paraboloid’s plan.

“This activity was more memorable than doing some sort of packet,” Spiegel said. “I think the skills we practiced will stick in our brains longer because of it.”

After a pair finished one problem, they could freely move onto the next one. Students had the entire period to complete all questions, which were based off of quadratics.

“I was able to complete it just before the bell rung and the problems were somewhat difficult for me,” sophomore Jocelyn Miller said. “However, after getting help from Ms. Ervin, I understood what to do.”

Although the activty was timed, it was not a competition. Any students who dressed up as a detective got five extra credit points on their test.

“The crime scene activity was more interactive than just a packet,” sophomore McKenna Thayer said. “I think after the activity and the practice I was better prepared for the test.”