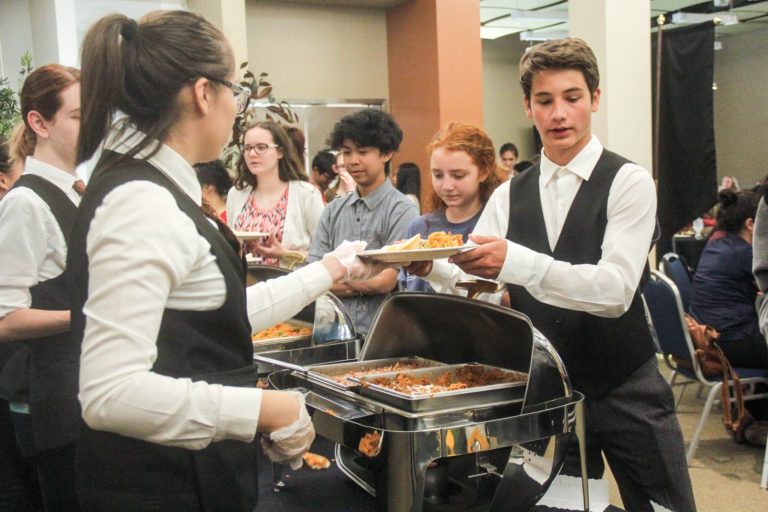 After junior Heather Gonzalez adds beans to his plate, freshman Brack Blackwell moves onto condiments for his taco. For dessert, Culinary Arts students served chocolate cake. "Today was, of course, tiring but exciting," Gonzalez said. "Whenever I do events, I get nervous and excited, but that once I get out there the nervousness rolls off and it's like a boost of energy. Today's event was interesting because it was a luncheon for our classmates when we usually do grown ups that aren't really related to the school." Photo Credit: Russel Valdez

To recognize student leaders and club accomplishments, Student Council held the annual luncheon for club members in the ballroom. Student Council adviser Miriya Julian derived the idea for the luncheon from other club advisers.

“Every year in mid-to-late April the National Organization of Secondary School Principals designates a week for student leadership,” Julian said. “The event was actually supposed to be held last week, but the ballroom was being used for College Night and other activities so we bumped the luncheon until today.”

The clubs that attended the event included: DECA, FCCLA, SkillsUSA, HOSA, Key Club, NHS, Video Production, Journalism and Student Council. FBLA did not attend the event because they are currently at the Nevada FBLA State Business Leadership Conference.

“[Key Club’s] dedication and passion for bettering our community is what makes me proud to represent them at this luncheon,” junior Mary Intal said. “Not only do I enjoy dedicating my time for my community, but I’m proud to take part in helping other people grow, as well.”

The luncheon was catered by Culinary Arts juniors who also organized the setup in the ballroom. For the main meal, a taco buffet was set up for attendees.

“We began preparing the desserts two days ago,” junior Tensaye Woldesenbet. “Chef Munoz wanted to make tacos like the last luncheon we held because it was easier for us that way. Plus, everyone loves tacos.”

After the meal, one representative from each club was called to the podium to announce the accomplishments that their members have accumulated throughout the school year.

“My two favorite parts of this event is always hearing about what all the clubs are doing and their accomplishments because it’s hard to keep up with so much awesomeness, and I also like the dessert,” Julian said.