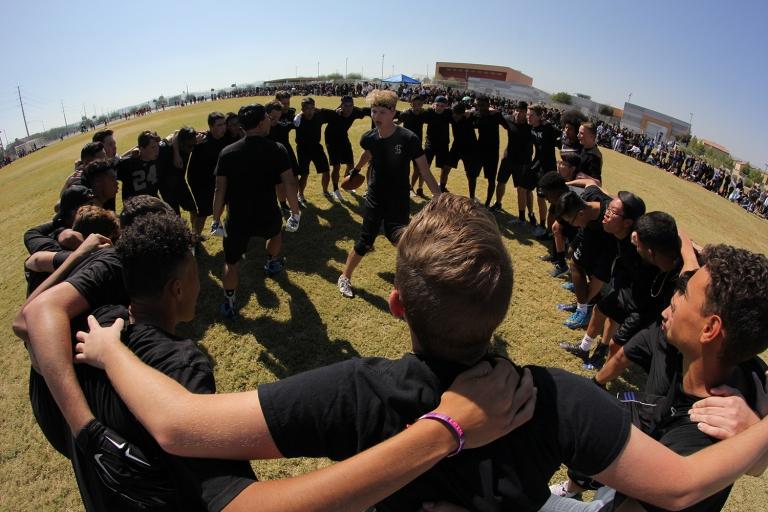 Huddling together before the game, Professional Academy boys chant one last time before stepping on the field. PA boys won by a score of 26-0. "It was definitely a great feeling, avenging the lost from last year," PA senior Trel Lakindanum said. "Both offense and defense did an amazing job and it was a great game to end the week." Photo Credit: Russel Valdez

Switching up the scores from the last homecoming football game, Design Academy (DA) girls defeated their rivals with a score of 15-9; Professional Academy (PA) boys lead the scoreboard with a result of 26-0.

“I’m glad I was able to score to get my team back in the game after DA had scored a touchdown,” PA sophomore Ylla Aparece said. “Unfortunately, DA’s players and refs had a lot of great plays that allowed them to score more. Despite this, I’m glad that my whole team played their hearts out in the game no matter what the score was.”

Referees monitored the PA/DA girls game; later, the physical education teachers were the referees for the PA/DA boys game.

“Normally the coaches [are the referees] for the game,” PA coach Robert Davis said. “This year, the two coaches for the girls game asked for [official] refs; the boys game was just [monitored by] coaches. It was a good game that was fun and definitely competitive.”

During half-time, K-Pop Club and the Coyote Cheer squad performed routines. Following the performances was the annual Homecoming Court Relay where a variety of games were played such as: dress up like a mime, build the Eiffel Tower, charades and a croissant eating contest.

“At this year’s PA vs. DA game, [we had] more halftime performances like K-Pop club,” senior Alyssa Colligas said. “Other than that, we stuck to the same tradition [for the game]. I definitely think spirit weeks this year were better than last year; we had Meme Day, Tacky Tourist Day–those are all fun things people like to get into and take pictures of for social media.”

While the game was being played, there were concession stands where clubs sold snacks; all proceeds from the fundraising went back towards the designated clubs. Additionally, SkillsUSA sold spirit gear for students to purchase throughout the game.

“Every year [HOSA] does the same thing; we sell chips and Arizona tea, so it was basically pre-planned,” junior Mia Alvarez. “Doing so makes it less troublesome and easier to figure out. Right now, we’re having a hard time with funds, so we’re hoping [this will] help out with the candy fundraiser and shirts.”

Tomorrow night will conclude Homecoming Week at the Panos Hall Courtyard; tickets can be bought at the door for $40.

“Homecoming Week is by far one of my favorite weeks of school because each day is filled with spirit ideas and there is a dance to look forward to at the end of the week,” senior Brikiti Brahan said. “It’s bittersweet to think this will be my last Homecoming of senior year but I know it will be worthwhile.”