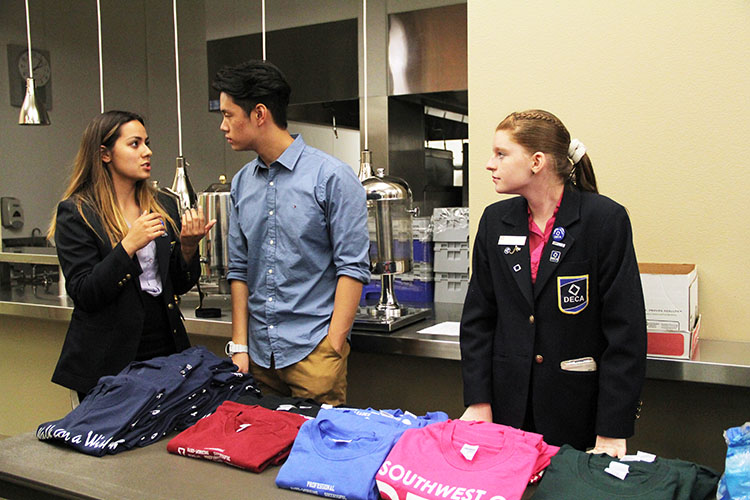 Competing DECA (Distributive Education Clubs of America) members returned from their State Leadership Conference on Tuesday, Feb. 23. Six of the 25 participants qualified for advancement to the national conference and three DECA members were appointed state officers: Kevin Camelo as VP of Publicity, Valeria Torres as State Secretary and Mari Nishimiura as VP of Membership.

“The feeling was honestly surreal,” junior Kevin Camelo said. “After months of hard work planning out our campaigns and practicing for our interview and test portions, three of us from Southwest became Nevada DECA State Officers. Being announced an officer made me feel like all my hard work and dedication paid off, and took a fear off my shoulder knowing that this year was the last year I could run.”

Candidates were required to prepare a speech, participate in an interview, take a test and campaign for their respective state officer position for a day.

“Each officer has a different role in the organization. Being the Vice President of Publicity, I am responsible for handling the social aspect of Nevada DECA and working on their various forms of social media with the help of my fellow officers.” Camelo said. “The roles have impacted SWCTA DECA as a whole by giving our organization the recognition of three DECA-cated officers.”

Competitors who placed first in their events will be able to attend the national conference free of charge.

“The highlight of the conference for me was getting first in my event,” DECA State President Cindy Kim said. “This is the first time I’ve placed and have been able to go to nationals. I did Marketing Communications Team Decision Making, which included one role play and one test. The highest scores got to place.”

“My favorite workshop was done by a former national officer that had us plan individual trips,” DECA State Vice President Marcelle Cruzado said. “It was really fun getting to partner up someone you didn’t know and what their interests were.”