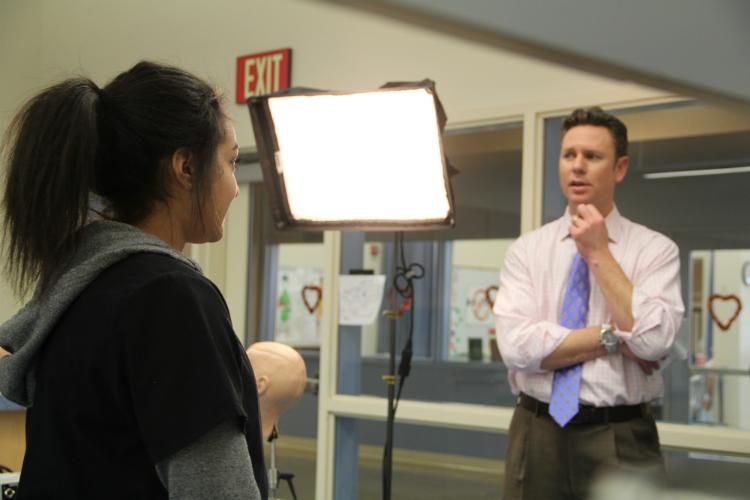 As an addition to their “What’s Cool at School” segment, 8 News Now filmed and interviewed seniors in the Dental Assisting program, reporting on material in the classroom and the aspirations of the students.

“This is a weekly segment we do, which airs on the 8 News Now morning show,” 8 News Now morning anchor Brian Loftus said. “The focus of this segment is to go around to schools in the valley and focus on programs such as art, fashion, music, theater, or, in this case, something that provides job prospects for the future to highlight some of the incredible things the students are doing within the school district.”

The story will air Friday, January 29; it will be shown three times on the morning show, at the 4, 5 and 6 a.m. hours. It will also be on the 4 p.m. newscast and posted on Facebook, Twitter and the company’s website, lasvegasnow.com.

“We have covered a lot of art and lot of theater, but there haven’t been a lot of programs in which we cover juniors and seniors in high school who are learning skills they can actively use in their occupational future and it just seemed perfect for ‘What’s Cool at School,'” Loftus said. “They’re learning skills they can use to make a salary one day and, in this case, really help out people in the service of dentistry.”

The report included techniques learned by the students, such as dental impressions. It also featured the various facilities used to carry out procedures in the classroom, such as functional dental chairs.

“They went around and looked at the different stations we have for the students during different procedures in the classroom,” Dental Assisting teacher Dr. Michael Georges said. “I think career and technical education nowadays is so important for kids; some can’t go on to college, so they need a skill that can put them in the workplace.”

“They asked me why I’ve chosen the dental field and if I’m comfortable in the same work environment,” Artinian said. “It was a pretty intense interview.”