Department of Education promotes Ms. Cindi Chang to write state standards The next Web Design and Development teacher is undecided 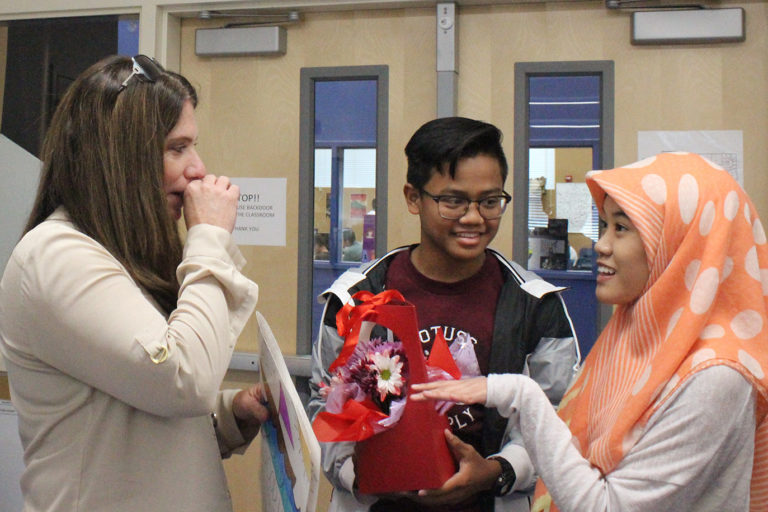 After the class wrote farewell messages, sophomores Cyrus Jacob Alonzo and Shareen Basyari present Ms. Cindi Chang with their goodbye card and flowers. “[I want my students to remember to] stay true to yourself,” Chang said. “Be the leaders that I know you are in whatever you do. That’s for everybody here not just Web design. Web design and computer science is one of my passions. That’s what my degree is in. I’ve built leaders; several of them run companies now.” Photo Credit: Zhen Yu

“Ms. Chang always believed in us,” sophomore Shareen Basyari said. “There are teachers who say they do, but few actually mean it and Ms. Chang is one of the few. Perhaps that’s what I’ll miss the most: her love and care for her students.”

Recently, Chang was promoted to work for the Department of Education where she will assist in writing computer science and STEM standards for the state of Nevada.

“Rather than just helping a class each year, I’ll be teaching the teachers, the district, the state, the government, the board of education,” Chang said. “I’ll be networking with other states on their computer science standards. I’ll be affecting more people and processes, so it is quite different than now.”

Although Chang wasn’t intentionally searching for a new job, officials at the state level offered the position because they needed a qualified individual to take part in the new education standards.

“Most of the time the people making those decisions don’t have the background needed, so that’s why they came to me,” Chang said. “Currently, for students to be exposed to computer science, they have to go to high school.”

After teaching for almost 12 years, deciding to leave was a difficult process for Chang. However, despite the emotional toll, Chang feels the sacrifice is worth it if it means she’ll be helping a larger scope of students.

“For anybody who has little brothers and sisters still in school, they’re actually going to be learning what a ‘loop’ is and what a ‘function’ is and other computer science terminology,” Chang said. “By the time they get into high school, they can really make some incredible things and have a good future in today’s world. I’m really, really excited to take part in that.”