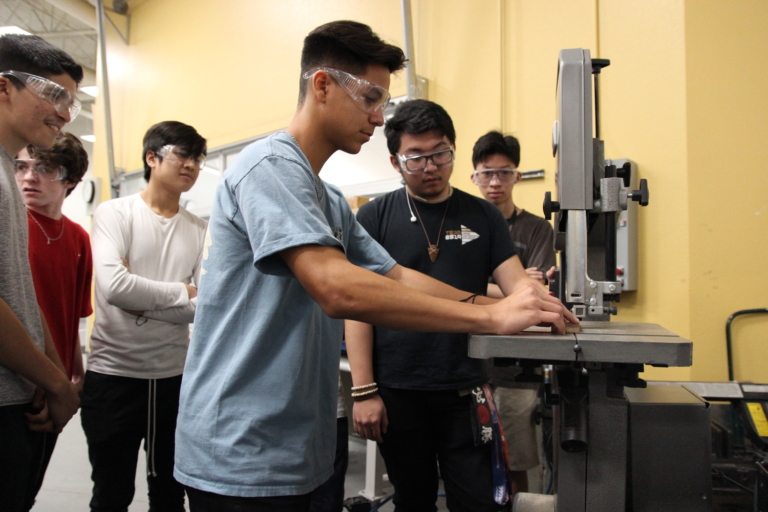 “A basis of engineering is structural analysis, the bridge building is a strong project to teach students that,” Nicolas said. “One of the students specified to me that they were interested in becoming a civil engineer, so this project was important to touch on.”

Last year, students paired up and created their bridges using balsa wood and glue. However, the project was not able to be tested before school was out for the year.

“I thought the bridge building project was fun and fascinating,” senior Samer Youssouf said. “It helped me understand how bridges work and what to do in order to create strong and lasting bridges. My best skill was the designing concept, but I lacked a little on time management which caused our bridge to not last the test.”

To test their structure, students spanned their bridges across two tables, where they hung a bucket of sand off of it. Students filled the bucket up until the bridge broke and then weighed it to judge.

“My partner and I did a good job at keeping our bridge light and effective, but the overall design had a bit of flaws that caused it to collapse early,” senior Ian Watson said. “Next time, I would add more support trusses onto it.”

After the tests are finished, students will learn more about bridges, trusses and safety. Seniors will revisit this project next month and see if they can create an improved bridge.

“I hoped the students would learn about the design process, like meeting the deadline of an important model,” Nicolas said. “Students needed to understand the highs and lows of building, such as fixing something when it fails to work. That’s one of the things you learn when you do hands-on learning, you need to know how to fix your problems, and that was something I stressed to my students when they built the project.”