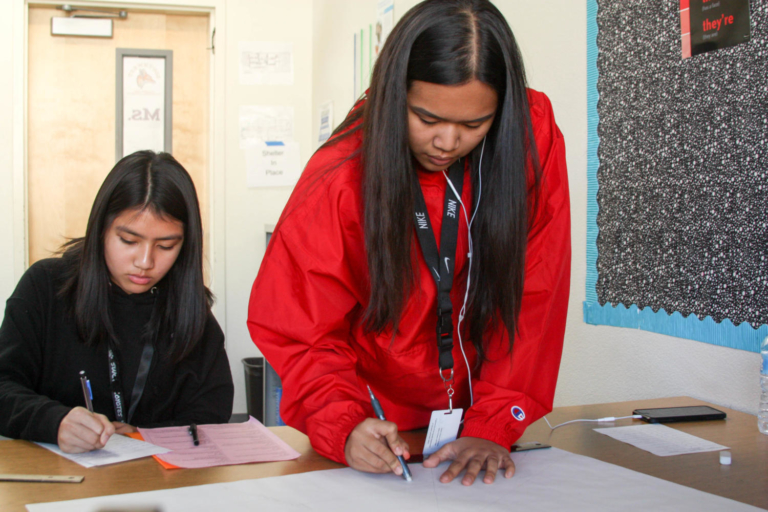 Drawing their design for the shelter, sophomores Lauren White and Angel Niu start to design the group’s fallout shelter. Students are assigned to pick a certain amount of survivors to live in their fallout shelter. "If one of the survivors was a nurse, our group would evaluate their health and would pick them off of the work experience," Niu said. Photo Credit: Jasmine Bobbins

Jumping back into their regular routine, sophomores in Ms. Amy Lutz’s English 10 classes have to design a fallout shelter for a list of fictional characters. During the students’ decision-making process, they had the ability to choose which characters would be allowed in the shelter.

“Some of the students are heartless about making these decisions,” Lutz said. “Even though these are fictional characters, students still have a hard time about who will be allowed to stay.”

Lutz borrowed the original project that focused heavily on a discussion from Ms. Sabol, who retired last year, and added the requirements of creating visuals for the characters and the design of the fallout shelter.

“[Ms. Sabol] thought that this would be a really fun activity and she’s done it with her students in the past,” Lutz said. “When I saw the activity, I thought it used English skills and was a fun way to come back from Winter Break.”

After students independently reviewed the background of the survivors, they had the choice to pick their own groups to work with.

“In general, our group picked survivors who were experienced and were in decent health,” sophomore Rihana Kemale said. “Still, our group definitely had some arguments about who to keep and who to get rid of.”

After the fallout shelter designs were drawn and survivors were chosen, each group had to defend their decision to their peers.

“When our group had to argue with my classmates, it was funny and exciting,” sophomore Evelyn Martinez said. “The project was fun, I wish my other teachers would do fun activities like this before starting serious projects.”