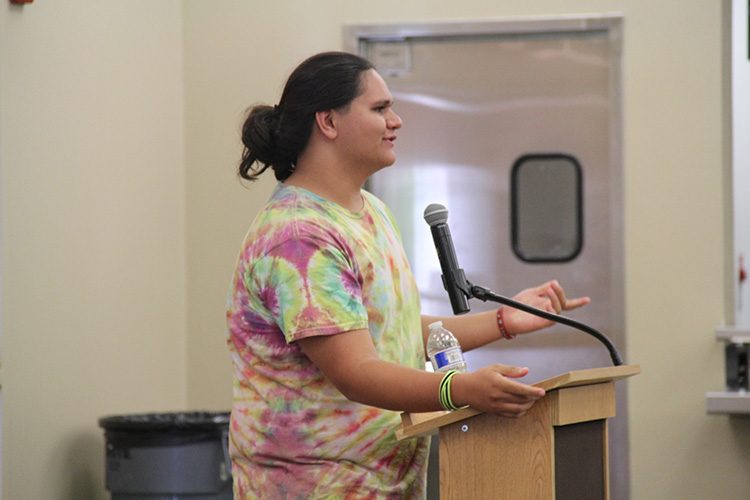 Environmental Club president Michael Medieros delivers a speech to the remainder of the club. The club's new board of officers will be announced next week. "It's nice to be part of something with a positive message like Environmental Club," Medieros said. "It's been a privilage to serve as the club's president." Photo Credit: Brandon Hatch

Environmental Club began electing its new board of officers on April 27 for the 2016-2017 school year. As of now, only the president’s position has been officially filled. The remaining positions will be announced by next Friday.

“I’m going to be taking over as president next year,” junior Michael Spencer said. “I’m currently the vice president of the club.”

In order to apply for an officer position, members are required to fill out a Google Form with identification information and their desired position, followed by a written description of their qualifications. They then undergo a private interview with their advisor, Geoscience instructor Martha Horner, who then selects the board members.

“They had to have been a member of the club for at least one year,” Horner said. “That was the main selection criteria. The second was experience, such as previous experience as an officer in any club. We have president, vice president, a treasurer, a secretary, and a community actions officer.”

While only the president has been announced, Horner has compiled a complete list of nominees. The list, however, will remain undisclosed until all of the positions are officially filled.

“I was part of the Gardening Committee,” senior Nino Nobleza said. “We had to organize different gardening events and try to get the garden set up for school, or try to, at least.”

Environmental Club has experienced a growth in membership. Last year, seven students were affiliated with the club. This year, over 40 students were official members.

“This year, we experienced the fastest growth of any year,” junior Stone Sha said. “There’s a big pool of people to pick from now and there’s a lot more talent, as well as more people dedicated to the club.”