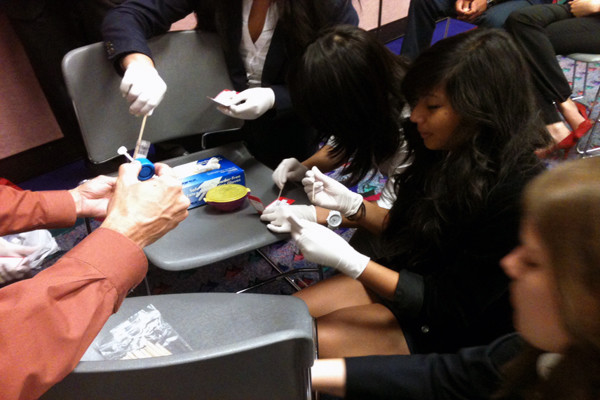 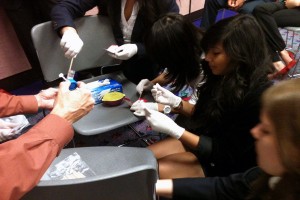 The day began with an opening session at 8:30 a.m. lead by the Nevada Career and Technical Student Organization State Officers. Towards the end of the opening session, keynote speaker and leadership professional Amy Gallimore entertained members with her enthusiasm, wit, and southern charm.

Following the opening session, members participated in a workshop where they learned about the art of public speaking in a state officer led workshop titled “Speak to Me!”

“I got to know more officers, and plus, they had a lot to say. They said things that we could relate to because we are all around the same age,” comments sophomore Keilah Gonatice.

Immediately after, students chose which of the six professional workshops they wanted to attend. Topics included being an active member of your chapter, professionalism, and social media.

Before a buffet style pasta lunch was served, attendees received a brief lesson on etiquette and proper social behavior. Students learned about proper silverware and napkin placement, acceptable conversation topics, and manners at the eating table.

The day continued with association-specific training in which each student organization met individually and discussed events pertaining to their CTSO. FBLA State Officers led a workshop on conflict management during this time, while HOSA members engaged in practicing different skills for future state and national competitive events.

“FLX was very fun and enjoyable. I believe that i learned a lot of new things and it was good,” states junior Flora Shi.

The Fall Leadership Extravaganza concluded with the closing session and awards ceremony where SWCTA’s HOSA and FBLA chapters received the “Farthest Travelled Award” for travelling 15 miles to the conference center.