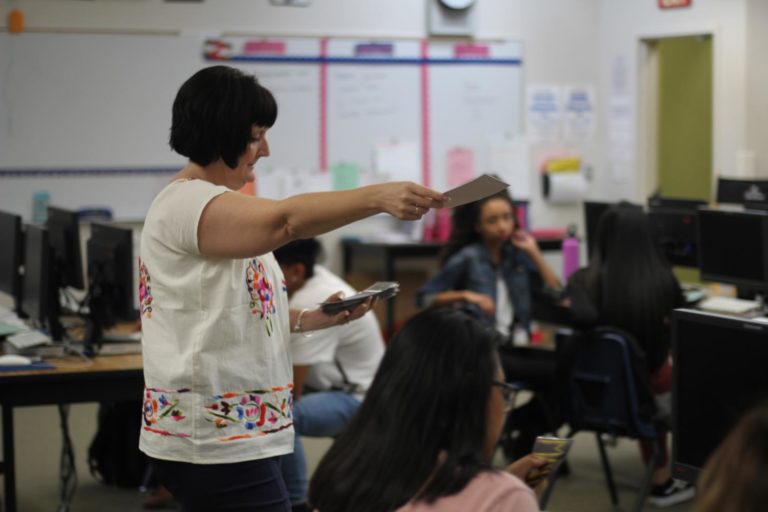 Fashion Design teacher Shannon Sheldon demonstrates different types of jackets to her junior students. This curriculum was meant to be covered last school year, but Fashion Forward interfered with their class time. “My hopes are to be able to get as much information crammed in with [the juniors] this year so that everybody will pass the End of Program Assessment.” Photo Credit: Nathan Willey

Due to the time required to study for the CTE End of Program Assessments, junior Fashion Design Students will only be able to complete the Fashion Forward challenge after-school.

“I learned last year after having the sophomores participate that I was unable to squeeze in the same amount of content as I ordinarily would have been able to squeeze,” Fashion Design teacher Shannon Sheldon said. “As a result, Class of 2019 is lacking in the amount of knowledge that they should have at this point in their fashion career.”

In the past, Sheldon allowed Fashion Forward participants to work on their garments during class.

“If we went ahead and had fun with fashion and did Fashion Forward again, then we wouldn’t get that information in and your scores would suffer,” Sheldon said. “That would be heartbreaking because you have to pass your End of Program Assessments to get your medallion and your certificate that says you’re a program completer at graduation.”

“The people who really want to do it are going to do it,” Sheldon said. “It’s also going to save the Junior League some money. I have one of the largest fashion programs in the city. They were having to provide materials for about 80-ish kids last year. So, they had to provide 3 yards of fabric for 80 kids. That’s a lot of fabric.”

Junior Fashion Design student Kianu Nicdao participated in Fashion Forward last year but did not make it past the elimination round.

“After realizing I wasn’t going any further into the program, I realize how I missed out on an opportunity,” Nicdao said. “Thankfully this year, we’re competing again and I feel like it’s a second chance for me and I can hopefully do better. I also wanted to do this because I think I have a lot of free time to be able to put effort into the work.”

Junior Fashion Design student Alex Nguyen made it to the final round of the competition last year.

“I decided to do Fashion Forward again this year because last year was an amazing experience,” said Nguyen. “I believe that [the lack of time] will improve the quality of work because with the limited time we will only push ourselves further to make our garments perfect and we can efficiently plan out how much time we have exactly based on after-school days.”

Sheldon encourages all students who are participating in the competition to come to school over the weekends to work on their garments.