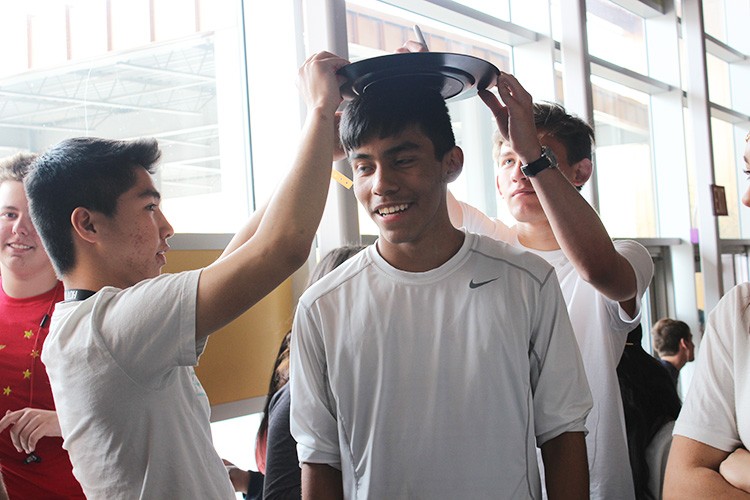 Students attempt to blindly draw an olympic medal as part of the Coyote Olympics lunch games. The games began on Monday and will end on Friday. "It was fun to be a part of the lunch games. Drawing on top of a person's head is more difficult than it might seem," senior Ezra Ocampo said. Photo Credit: Russel Valdez

The first Coyote Olympics event, which consists of kickball, volleyball, dodgeball and field games, began on Monday, March 14 and will end on Friday, March 18. The event was organized by Student Council (StuCo).

“We had a captains’ meeting prior to the Olympics, but they officially began on Monday,” StuCo Adviser Mariya Julian said. “There have also been lunch games, which vary from day to day, such as relay events.”

“It’s exciting to have a sporting competition here at SWCTA since we never get to do anything like that outside of P.E. class,” senior Earl Buenaflor said. “I have faith that my team can eventually pull through.”

The final event, field sports, will take place tomorrow. Winning teams will be announced at Friday’s assembly and will receive gold, silver and bronze medals for first, second and third place performances, respectively.

“The top four teams will go to the assembly on Friday to compete for the medals,” Julian said. “The prize, along with the medals, is recognition, just like the real Olympics.”

Competitions take place on the field, as well as practices.

“It’s amazing to get to express my competitive nature at school,” senior Morgan Nogal said. “It’s refreshing to do something that doesn’t focus only on classroom performance.”