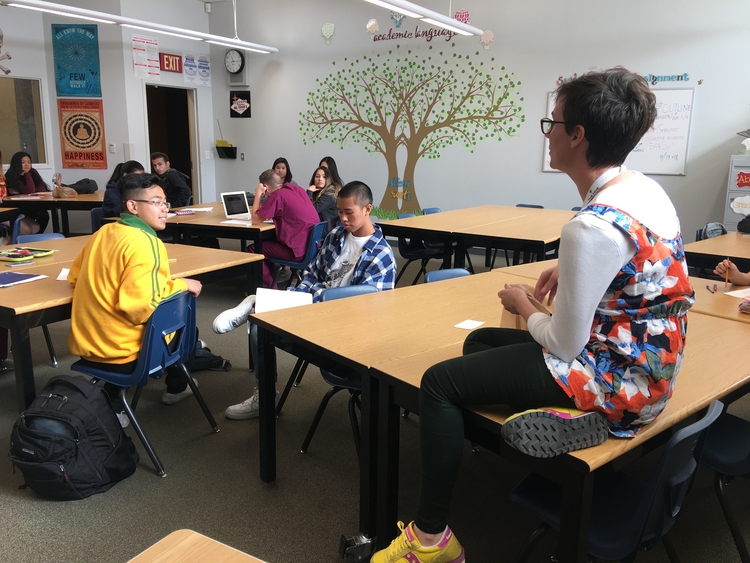 As a chance for students to present original writing, music, spoken words, or slam poems in front of a wider audience, an open mic night will be held in the ballroom from 2-4 p.m tomorrow.

“They can do anything original–anything to showcase their brilliance,” English instructor Mrs. Samantha Yoder said.

Only a few students have currently signed up. For those who are interested in participating, an application is available online. There is also a QR code on the flyers around campus that leads to the sign-up form.

“We have poetry slams and book talks in my English classes, and the kids have to do one once a quarter,” Yoder said. “They were so surprisingly good–better than the good you would expect from students, so someone tossed out the idea that we should take a trip, but we decided it would be easier to host an open mic night to give them a bigger platform.”

Organized by Yoder, she hopes to provide a coffee cart or snack cart. She’s considering scheduling more open mic nights in the future depending on how well attended this first one is.

“If we get a big turnout, I think we would have students vote on the next one whether they’d like for it to be a competition,” Yoder said. “Then maybe we’ll have a yearly finale sort of thing with top performers presenting their pieces.”

Yoder’s goal is to set up a positive atmosphere where students will feel comfortable to take the stage.

“I’d be interested in going because I’d like to see the creativity and ideas of other people,” freshman Caitleen O Berry said. “Poetry is important because it’s a great way to express someone’s feelings and that’s what makes it so powerful.”

All students are welcome to watch their peers’ performance and participation is not required.

“I feel like it’s a tough age group to feel like you’re heard, so it’s really important for us as we grow up to express who we are, who we want to be, and how we want the world to be by handing them a mic and saying don’t swear but say everything else,” Yoder said. “We want to hear your version of events.”