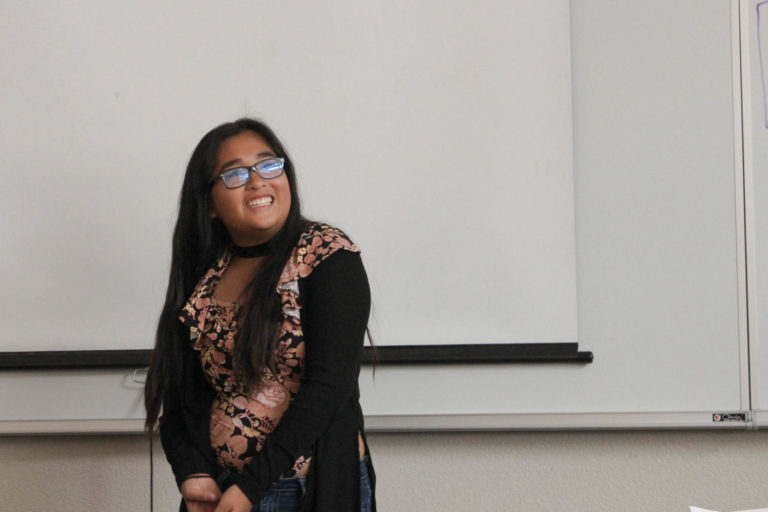 Freshman Neilane Austria delivers her 25 second “Um or Uh” speech in front of the class. Henry Castillo’s freshman studies class started applying their public speaking skills by participating in this exercise. “Everyone is really into it; we laugh and have a good time,” freshman Chastine Tran said. Photo Credit: Shareen Basyari

The “Um or Uh” speech, a competition amongst students in which they have to present a speech that is related to a specific day’s topic without using filler words, was introduced by Freshman Studies teacher Henry Castillo last week.

“I was tired of students using um or uh’s to fill up space or time,” Castillo said. “It really shows how unsure and unconfident someone is in a speech, and this requires students to prepare and plan. We should always know what we’ll say next when we give a speech.”

Castillo requires the students to apply ACT/SAT words from the class’ “Word of the Day” into their speeches. So far the freshmen have learned four words: vociferous, ubiquitous, statute and pertinacious.

“Incorporating the words is easy because they have simple meanings, but it’s hard to keep talking for a certain amount of time,” freshman Chastine Tran said. “25 seconds is a lot when you’re actually up there.”

Not only is the “Um or Uh” speech a means to improve public speaking, but it is also a competitive game.

“At first I thought I couldn’t pass this, but I just spoke about a random subject and started to talk more about it until Mr. Castillo told me to stop,” freshman Connie Trinh said. “I think everyone has a fun time doing this, even though there used to be tension in the air when we first started.”

Since introducing this exercise, Castillo has noticed a change in his students’ public speaking skills.

“When people think of public speaking, most don’t like it,” Castillo said. “I was curious how students would react at first, but they seem to really enjoy it. Not only do the speakers like it, but the audience does too because they get to listen for those um or uh’s. It’s an activity that’s all inclusive.”

Castillo plans on doing the “Um or Uh” speeches every other week for the rest of the semester in order for students to always be prepared.

“Martin Luther King had to start somewhere, everyone does,” Castillo said. “I think my students have a lot of potential. They will take what they learn from this class and be just as good as Martin Luther King.”