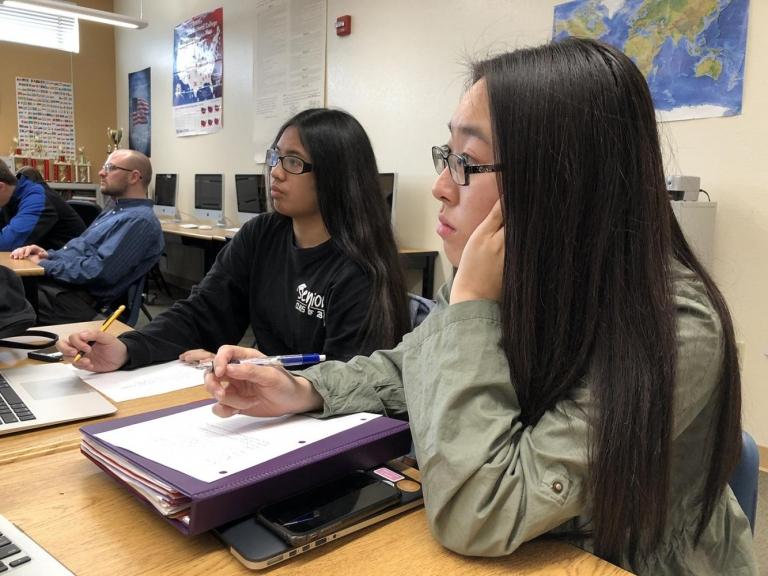 While listening to the presentations, seniors Kaitlyn Zhang and Gabrielle Gonzalez take notes on the important points said by the presenters. The purpose of the notes were to ensure the students were paying attention during the presentations. "Overall, this project taught me to look at different viewpoints and be able to create an argument to persuade people to fund our agency," Zhang said. Photo Credit: Julia Cox

In order to learn more about federal bureaucracy, students in Mr. Joseph Juliano’s Honors Government classes are creating a short presentation describing a federal agency in the executive branch.

“When covering federal bureaucracy, the amount of information can actually be really overwhelming,” Juliano said. “Since there are so many departments and so many things that they do; the project is there to simply the learning experience.”

Along with the description, students were required to convince Juliano, who acted as the president, that funding for their agency should not be cut. Based on how well students presented their arguments, the agency’s funding could be cut up to 25 percent.

“My partner and I did a lot of research on our department in order to be successful,” senior Liane Cabrera, who was defending the Department of Education, said. “We mainly focused our research on the government website of our department because that is where the most accurate facts are.”

The project has been conducted for several years after Juliano received the idea from a peer at an AP Government conference.

“During this project I was assigned to the Department of Education and I really learned a lot about how some people think that this department doesn’t need to exist on a government level and should be fully left up to the states,” senior Kaitlyn Zhang said.

Juliano hopes to continue assigning the project to future classes; however, he would like to make a couple of changes along the way, such as involving the class to play more of an active role in the decision to cut funding.

“By defending the agency, you’re forcing yourself to understand why all of the departments are important,” Juliano said. “It’s always interesting to see how the students fight for the department they chose because there are new points brought up that even I wouldn’t have even thought about.”