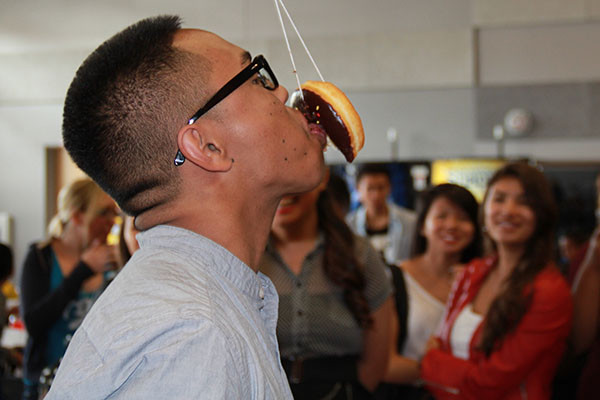 Senior Jon Beauford Langub attempts to eat a donut off of a string on a stick during a homecoming week lunch activity.
Photo Credit: Hailey Basner

Today students and teachers participated in the first day of Homecoming Spirit Week, Greaser Day. Everyone was encouraged to dress up in 50s apparel, such as leather jackets, denim capris, white or black shirts and Converse.

“I really enjoyed dressing up for Greaser Day! I enjoy the leather jacket and converse look because the 50s are coming back,” senior Naylani Pino said.

Along with Greaser Day, student council members held a “doughnut-on-a-stick” challenge that involved two students from the same grade attempting to eat a doughnut off of their end of the stick. The person that ate the doughnut the fastest was declared the winner.

“It was embarrassing, but also surprisingly challenging, even though it was awkward to eat a donut off of a stick with someone on the other end of the stick doing the same thing,” To-ong said.

Homecoming tickets are still being sold during both lunches this week for $35. Tomorrow is Tacky Tourist Day which means students can wear khaki capris, flowery button up shirts, fanny packs and sunscreen.

“I am so excited for Tacky Tourist Day! I can finally pull out all the lame clothes I use for camping,” junior Kaitlin Eure said.

Two nominees have dropped out of the running to be elected Homecoming King.