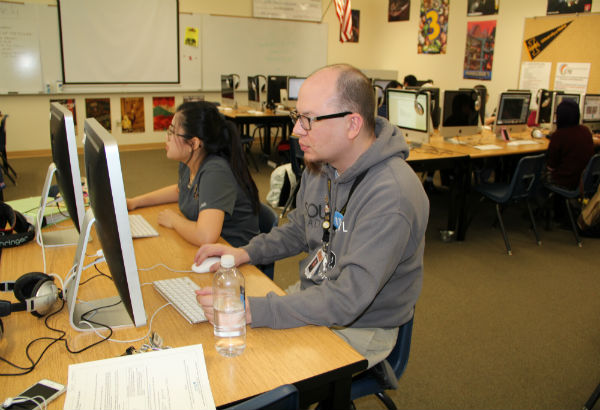 Journalism adviser Matthew Laporte looks over a yearbook spread with one of his students. LaPorte dedicates much of his time to the journalism staff and has been rewarded for his efforts. Photo Credit: Helen Abraha

Journalism instructor and adviser Mr. Matthew LaPorte was designated as a Rising Star by the Journalism Education Association (JEA) on Jan. 27.

“For the three years I’ve been his student, I’ve developed my skills as a writer, designer and photographer. He doesn’t let mistakes go in order for me to learn from them and to prevent myself from making such mistakes. As an editor-in-chief, he has taught me to teach and assist my own staff,” Editor-in-Chief of The Howl Yearbook Tamara Navarro said.

“I’m beyond honored, and even more honored that the application was submitted by my students,” LaPorte said.

The awards committee selects Rising Star recipients based on the nominee’s “involvement at the state and national level, growth in nominees’ advising programs, and quality of the student media they advise.”

“As his student for three years, I’ve learned that tough skin is a must for journalism. Since he has very high expectations, I would have to say that it has rubbed off on me and is reflected in both my personality and my work. Under his instruction, I’ve learned to be a more confident person and overall, a better journalist,” Management Editor of the Southwest Shadow Nikki Molina said.

LaPorte has been teaching since Jan. 2007. He began teaching at Eldorado High School before coming to open Southwest Career and Technical Academy in 2010. He advises both The Howl Yearbook and the Southwest Shadow, which have earned awards such as the NSPA Online Pacemaker and the Columbia Scholastic Press Association Silver (CSPA) Crown.

“We are extremely proud that Mr. LaPorte has received the Rising Star award. Mr. LaPorte is an exceptional teacher who sets the highest expectations for his students, while providing guidance and instruction that allows for students to reach their fullest potential. He gives students the freedom to explore topics and events that matter to them, which shows in their award-winning writing,” Dean Trish Taylor said.

In addition, only 11 journalism instructors with five or fewer years of experience were selected as a Rising Star for 2015. Since 2006, only 76 educators have earned this award from JEA.

“I just love what I do. I can’t imagine not being an adviser and I am blessed to have such a great staff that really wants to put forth the best that they can,” LaPorte said.