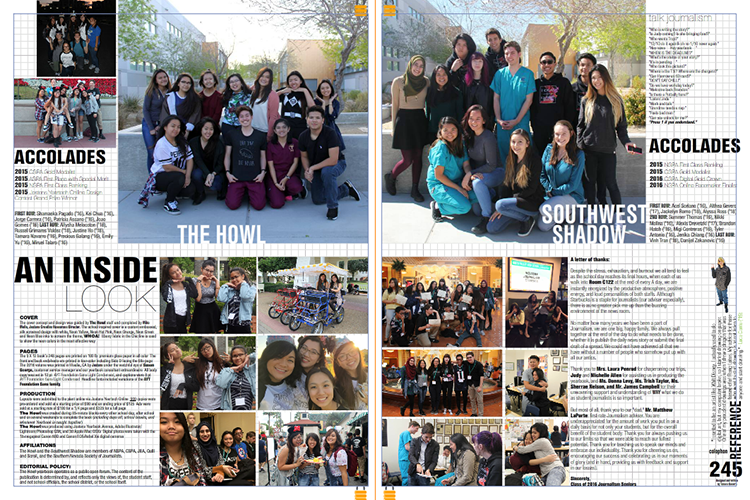 The Journalism staff, which consists of the Southwest Shadow online publication and The Howl yearbook, have received a series of collective awards recently, including the honor of being named a CSPA Digital Gold Crown winner and being named a “Whole Book Look” in the 2016 edition of Jostens Lookbook, respectively.

“I love being a part of something as fulfilling as our publication,” News Editor Acel Soriano said. “I’m not at all surprised by our ability to produce amazing work that gets recognized nationally.”

“What I think really sets apart our publication is that we are truly student-run,” Jr. Editor-in-Chief Althea Gevero said. “We do the writing, editing, publishing, picture taking–LaPorte has the final say, but our staff is a well-oiled machine that wouldn’t be the same without every student.”

“Our staff is pretty small compared to other schools, and it allows everyone to contribute in their own distinguished way.” Yearbook Copy Editor Miruel Talaro said. “We’re really close since we’ve spent so much time together working on the book after school and on weekends.”

“It’s extremely impressive that the Journalism students are able to be recognized nationally and outshine publications and books from all across the nation,” senior Brandon Ly said. “It really reflects their immense dedication and skill.”