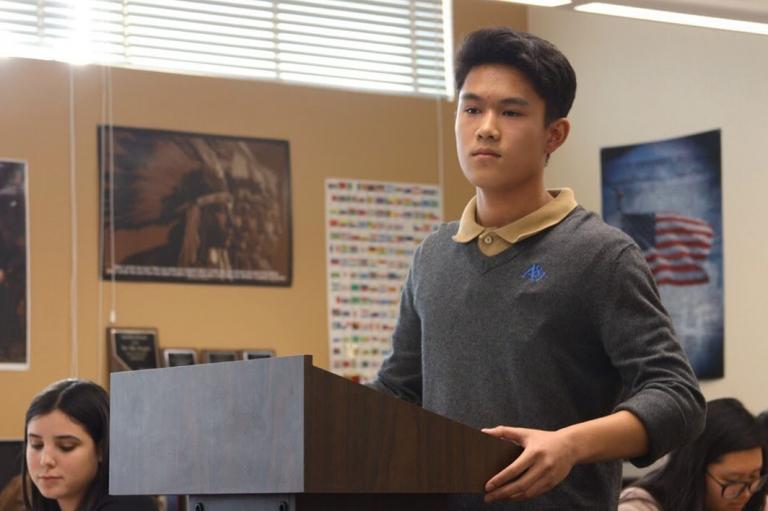 Keeping it contained, senior Jose Ang waits patiently, prepared for the judges to test his argument. Students participated in a mock-court which helped them learn about the judicial branch. “This activity was to end our judicial branch unit,” Juliano said. “I not only wanted students to learn about the court but actually play a role in one.” Photo Credit: Eriyale Williams

In order to gain a better understanding of a court case, seniors in Mr. Joseph Juliano’s US Government participated in a mock-court activity and were given nine different topics to choose from.

“Groups were able to pick a list of nine debate topics that were in the Supreme Court over the last few years,” Juliano said. “Each class had three separate courts [groups] with a different chosen topic.”

The few of the nine cases that got chosen were: Fisher v. UT-Austin, Woman’s Health v. Hellerstedt, Town of Greece v. Galloway and Trump v. Hawaii. All these cases correlated to different amendments that are presented in the Constitution.

“As a judge, I presented in the Fisher v. UT-Austin case,” senior Samantha Fernandez said. “I liked this case because it was about Abigail Fisher, a white female, that was denied by UT-Austin, in 2008. She sued UT-Austin because she claimed it was unconstitutional and that she was discriminated against.”

Each court was made up of seven judges and four attorneys. The attorneys prepared arguments and judges were responsible for questioning the arguments.

“It was hard not to be bias during the session as a judge,” senior Charlyne Balagtas said. “[Judges] have to be able to separate their own personal beliefs from what the law states, as they asks attorneys questions and test their arguments.”

The four attorneys were each assigned either petitioner or respondent for their respective case. Attorneys were responsible for a seven minute argument and then a three minute rebuttal against their opponent; however, supreme court justices had the obligation to ask questions throughout the whole debate.

“My ultimate favorite part of being an attorney was being able to stand at the podium and just respond to the opposing side with facts and information,” senior Thomas Miller said. “Mr. Juliano had everything set up in a way that it felt like a real trial to me and I would love to do it again if I had the chance.”

Students began to prepare presentations before fall break, but have been studying the judicial branch for multiple weeks.

“This hands on experience helped me learn more than anything in the classroom,” Fernandez said. “It also helped me develop as an active listener, become observant and understand different perspectives.”