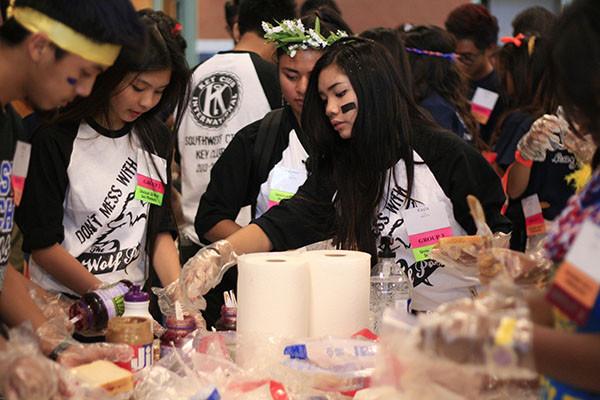 Sophomores Kayla Dalope, Linda Do and Cailin Lopez are making PB&J sandwiches for a community service project. The sandwiches will be delivered to the less fortunate people, who don't have food to eat. "As I was making PB&J sandwiches, I felt a sense of pride and happiness because I love the feeling of giving back to the community. I just felt so accomplished and proud," Dalope said.
Photo Credit: Jessa Bermudez

On October 12, Key Club won the cheer rally for the division spirit stick at the Regional Training Conference at Centennial High School.

Each school had to cheer their loudest and compete against other schools from their division. During the cheer rally, Key Club used their own original cheers, “Southwest Pride,” “Moose,” “Coyote Stomp,” and “Cu-Cu-Coyotes.”

“All the cheers contributed into allowing us to win for our division, but I believe ‘Southwest Pride’ brought us to win, because without a good enough beginning, we wouldn’t have made it into the division finals,” junior Charles Cruz said.

The cheer rally started by each school choosing one cheer of their choice. Then, the judges made their decision on which top six schools would compete in the second round.

“Once I heard Southwest will move on, I was jumping up and down, going crazy and screaming ‘Go Coyotes!’ Freshman Valentino Tobias said.

“When they announced us as the winners for Division 28 West, I honestly stopped breathing and cried because is was like a dream. It was amazing how our club exceeded my expectations, ten fold; they deserve that spirit stick more than anyone else,” VP of Spirit Desiree Galera said.

Ultimately, Southwest CTA lost to East CTA for the cheer rally, but they did take home the division spirit stick. As for the new members this year, it was their first experience at RTC and the last for the seniors who will be graduating this year.

“Winning the Division 28 West spirit stick was unquestionably one of the most exhilarating moments of my four years in Key Club. As president I could not be anymore proud of this club already. The members, my amazing board, we’re a family and we won as a family. It feels amazing to win my last year!” President Lea Ligutom said.

Besides the cheer rally, Key Clubbers also participated in workshops, community service projects, and a dinner and dance to end the night.

“The last two hours was really fun. We danced with other Key Clubbers and we were able to meet new people. Even if the schools barely knew each other, we got along very well,” sophomore Jessa Bermudez said.

Ending RTC with a win, Key Club will continue practicing their cheers and making new ones in hopes of not only winning the division spirit stick, but winning first out of all schools in Las Vegas.

“Next year, I plan on having more cheers, spirit gear and new members. Also, I’m definitely planning ways for us to become the spirit stick winners for all of Region 5. I can’t wait for next year!” Galera said.