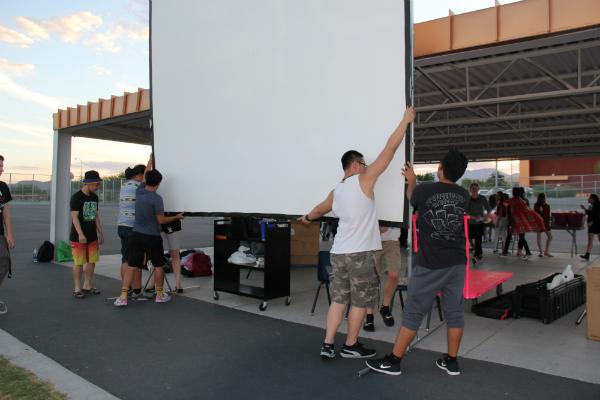 Students begin setting up the screen for this year's Movie Night. The event faced an unexpected halt when projection equipment lost power.

During the Sept. 25 Movie Night event, a generator powering the projection equipment failed at about 8 p.m., causing the screening to end prematurely.

“It ended early because the generator stopped. They went to go try and fix it, but they couldn’t get it fixed, so we had to end it early. Mrs. Julian sent her apologies out to those who did come to watch,” Librarian Mrs. Veronica Whiton said.

“Even though the movie ended early I still had a fun time just hanging out with my friends and watching a movie,” senior Kelly Bui said.

Student Council is planning an undisclosed form of compensation for those who attended Friday’s Movie Night event.

“Mrs. Julian and Mr. Campbell decided that they want to make it up to the students somehow, but that somehow is a secret,” StuCo Secretary Victoria Truong said.