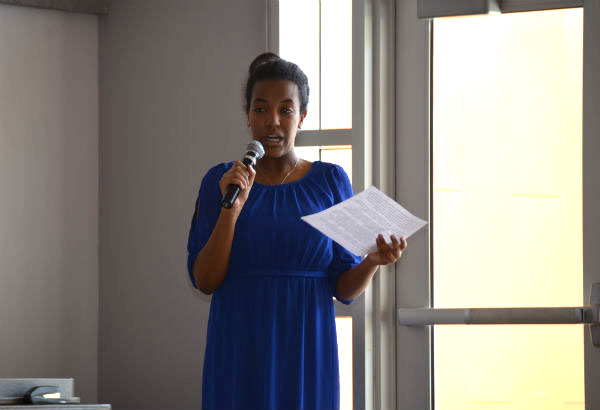 Running for president elect, Samrawit Misiker recites her speech in front of NHS members. The members of NHS were able to vote for the candidate they wanted to fill each position. "Everyone did a really great job and even those who didn't win were very brave to put themselves out there and run for a position," Misiker said.
Photo Credit: Rein Villahermosa

“I thought the elections this year were great and everyone gave fantastic speeches. I’m really looking forward to working with all of the new members,” NHS treasurer Sydney Lapira said.

At the meeting, nominees were required to recite a one to two minute speech explaining why they wanted to be an officer. After all the candidates for each position gave their speech, members took a vote on who they wanted to elect as their new officer.

“I thought we had a great ballot, all three were full of well qualified speeches and they did great. It helped having them submit them early to preview their speeches as well,” NHS adviser Miriya Julian said.

The following are the newly elected executive NHS board members for the 2015-2016 school year:

“I was really surprised when I found out in the end I was unopposed. I’m really excited to be working with the future board and I plan to make every moment of NHS memorable for all its members,” Historian Marissa Villarosa said.