Nevada Board of Education frees class of 2017, 2018 from graduation testing requirement 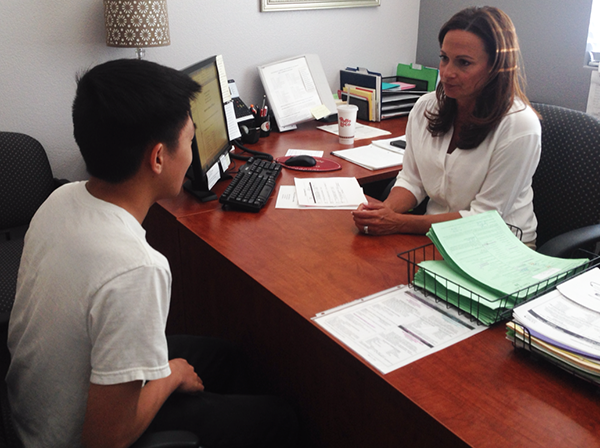 Sophomore Skyler Lao spoke with his Guidance Counselor, Ms. Paige DeSantis, on Apr. 22. "I would rather see every junior have to take the SAT, because that's more important for them to get in college. If they take it as their assessment next year, they'll get better at it," Desantis said.
Photo Credit: Jen Chiang

On Apr. 17, the Nevada Board of Education exempted high school freshmen and sophomores in the 2014-15 school year from the graduation testing requirement that states all students must pass the four proficiency exams in order to graduate.

“As the state standards are in the process of being changed, it is probably necessary to change the graduation requirements to meet those new standards,” Community Partnership Coordinator Mr. Craig Statucki said.

The board also made a decision concerning the implementation of two types of exams during the same school year, a “college and career readiness assessment” for juniors in all Nevada high schools and an end of course exam for freshmen and sophomores in their math and English courses.

“I feel as though the exit exams are similar to what we already have now, but it could be a good addition. In terms of math, a kid in geometry won’t have to remember what’s in Algebra I and just focus on one subject,” Dean A. Yee said.

According to the Las Vegas Review-Journal, the class of 2017 and 2018 will be taking the four new exams but will not have to pass them to prove they possess the minimum skills to be college or career ready because they are entering high school as the state replaces the proficiency exams with the new end-of-course exams.

“I’m actually really relieved and I think this is a good change because I won’t be under as much pressure when I go in to take the exams,” freshman Melanie Zintle said.

Because the state is only changing its graduation requirements, past students who couldn’t graduate because they failed at least one of the four proficiency exams or graduated only after retaking the exams before graduation wouldn’t be to sue or change their graduation status, the Las Vegas Review-Journal reported.

“I believe they have some grounds for filing a possible lawsuit, however, high school education is in the eye of the beholder in my opinion,” Yee said.

The freshmen and sophomores will be administered tests at the end of their math and English courses so that they can provide the state with results that can calibrate passing scores. Students starting with the Class of 2019 will have to pass all four exams to graduate. In addition, the board also made a decision to dispense a “college and career readiness assessment” for juniors in all Nevada high schools.

“I think it’s quite beneficial to the Class of 2017 and 2018, but it isn’t very fair to the rest of the classes since it’s still required for the Class of 2019 and up to take the proficiency exams and pass it,” freshman Rhovi Naliponguit said.

According to state lawmakers, students must pass these exit exams in order to graduate. However, because the Class of 2017 and 2018 are the first classes to be tested on them, they only need to earn a passing grade, which is a ‘D’ in most Nevada districts.

“Giving these end of course exams would be just the same as giving the semester exams, so it might be a little redundant. Especially in math, where the district already provides the exams for Algebra I, Geometry and Algebra II,” Dean Trish Taylor said.

The assessment for the juniors has still not been determined, but the board has been discussing using either the SAT or ACT, both of which will be helpful for college-bound students.

“Since I personally want to go to college, I think it would benefit us the most if we took the SAT, because we have to take it anyway and colleges will look at the scores,” sophomore Kayla Dalope said.

With the ACT exam costing $2.4 million and the SAT exam costing $1.8 million and no funding from state lawmakers, the state Education Department has decided to raise the estimated amount of $1.7 million through private donations and grants by the end of May in order to provide the 35,000 juniors with the exam, the Las Vegas Review-Journal reported.

”I would like to see not only the ACT given as a test graduation requirement, but also the ACT Work Keys Assessments,” Statucki said.