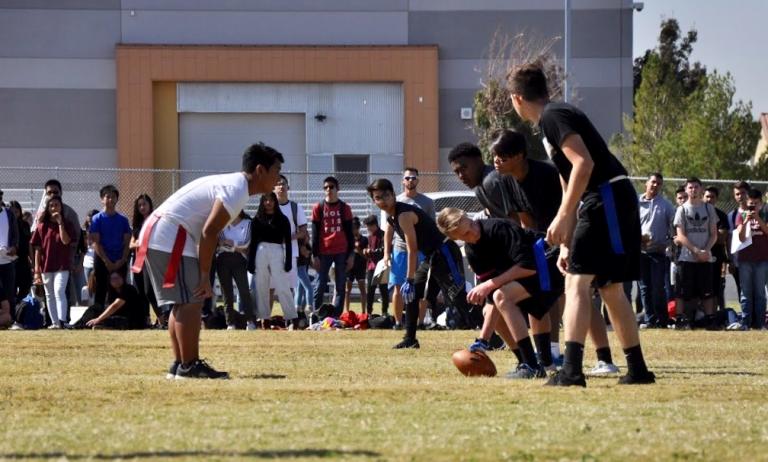 On the day before homecoming night, the Design Academy and Professional Academy compete in a flag football game. Professional academy boys won their game with a score of 26-0. “The DA vs. PA game is what makes [our school] one of a kind because other schools have normal tackle football as their homecoming game,” sophomore Carrie Lee said.

To build a sense of pride and promote creative freedom for students, teachers and staff are encouraging students to use #OnlyAtSouthwest to highlight positive moments that happen on campus.

“We’re bring back the hashtag because I, as well as other teachers, are hearing kids say [“Only at Southwest] again,” Video Production teacher Tom Rizzo said. “I heard one of my students say the phrase after [Mr. Matthew] LaPorte shaved off his goatee for the morning show.”

The Got Core Values committee initially proposed #CreativeCoyotes for social media usage, but because #OnlyAtSouthwest had already been a recurring hashtag used by the student body, the committee decided to bring that back instead.

“If there’s anything cool happening around school, students should capture it and post it on social media when they can,” Government teacher Joseph Juliano said. “Capturing anything at school is a good way to showcase, post and put on display creative things that happen we do here.”

The phrase originated in 2010 when the school first opened and also inspired the 2013 yearbook theme. The former principal Felicia Gonzales often said the phrase “Only at Southwest” when students would do unusual activities, such as laying down in the middle of the quad and having light saber fights.

“#OnlyAtSouthwest is a good way to publicize events at our school because it gives Southwest a name on social media,” sophomore Ahsan Fahim said.

Rizzo plans to keep the hashtag alive by featuring it on the morning show through commercials. Several teachers around campus, like English teacher Cathy Sabol, are encouraging students to use the hashtag by writing it on their classroom whiteboards.