The Outlook reaches Episode 50 After morning announcements, the special will air Friday 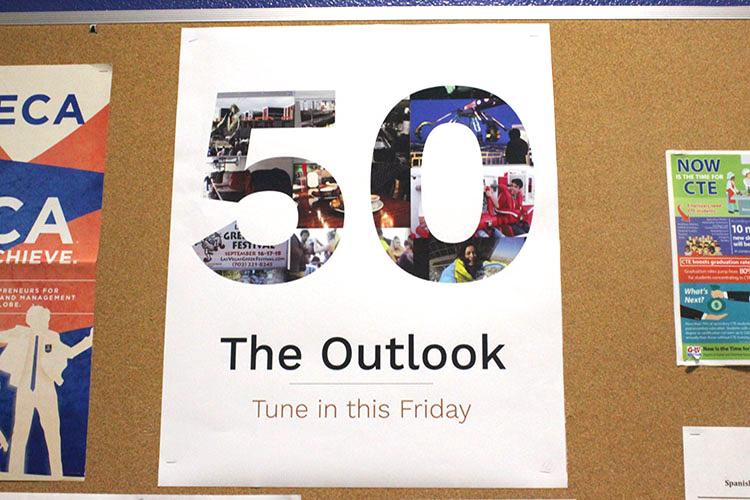 The Outlook, Episode 50 will be a memoir of all the work that's been put in from the present and past. The show has been scheduled for this Friday, March 24. "Without all of these students, teachers and community members over the years, this 50th show would've never happened, so it's only right to feature those who made it possible," senior Danielle Johnson said. Photo Credit: Maggie Shepard

Eight years ago, the first episode of The Outlook was produced. Now, the 50th episode will air on Friday, March 24.

“The Outlook is a monthly news show that takes a more in-depth look at any topic that our crew decides,” senior Edgar Garcia said. “Our team is able to cover topics outside of school and bring them back for the students.”

The special has been planned out well in advance and is going to be a reflection of the show’s history. Interviews from former producers and a portion of the show was dedicated to those who’ve been supporting the segment through the years.

“The 50th episode is going to be a bit of a tribute to the episodes and hosts from previous years,” senior Danielle Johnson said. “We have interviews with former students and a look at some of the shows throughout the years, as well as a package in how our school has changed since it opened.”

“Two to three kids every year are put in charge of The Outlook,” Rizzo said. “I’ve got about four underclassmen who I’ve been watching for next year’s team.”

Prior to the start of the school year, the trio curated 12 video ideas with various themes and four segments for each episode.

“Sometimes we hear about events going on in the community and try to cover those,” Johnson said. “Other shows are planned out far in advance about specific teachers or students that we try to fit into that episode.”

“My favorite episode was Episode 46, which was about Fright Dome,” Garcia said. “John and I were able to film next to all these major news channels and meet the local celebrities.”

This year’s crew have been able to film a number of episodes off campus. Rizzo has also set a goal for next year’s crew to be able to output more shows than this year.

“I would like to see more off campus shows this year and next year,” Rizzo said. “I’d also like to get the show to where we’re doing it twice a month rather than once a month.”

All past episodes can be watched on the CoyoteDigitalMedia YouTube channel.