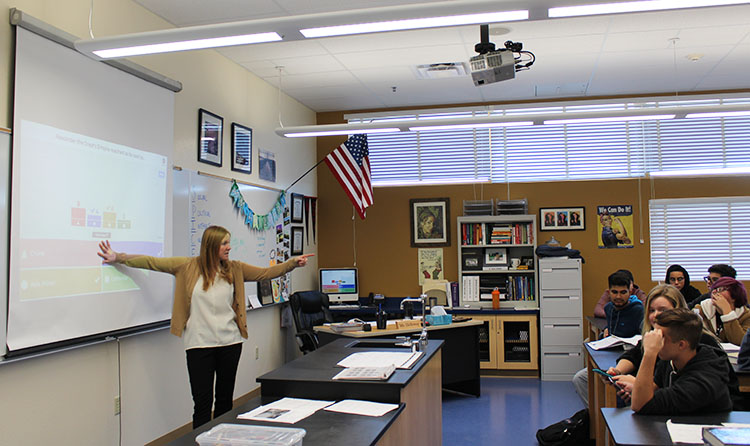 To understand the structure of ancient civilizations, sophomores in Ms. Rebecca Holloway’s World History class are creating their own representation of a successful society by making their own artifacts, starting today  and continuing until the end of the semester.

“Ms. Holloway explained to us how every factor in a civilization contributes to its survival, so it will be interesting to see how the projects end up,” sophomore Brooke Hartzell said.

Holloway has taught her students about the African, Chinese, Indian, Greek, and Roman civilizations first semester. After analyzing the outcome of these historic groups, the students will take inspiration or change aspects to perfect every aspect of their civilization.

“[Students] are trying to get their civilization to be the strongest and stand the test of time,” Holloway said. “Whether it’s based on their economy, government, social or political factors.”

Although there are no restrictions, they must be able to defend the choices they make in creating their societies.

“There is also a written component which integrates the members of the social hierarchy,” Holloway said. “With a ruler on top, workers in between and peasants on the bottom, the students will put themselves in that pyramid and write about it.”

The groups will be making five to seven tangibles for the project. Holloway has encouraged her students to bring materials found in their own home to class and create their artifacts.

“I feel like this is going to be fun and we’re going to have to work together and cooperate to be successful,” sophomore Ariana Maher said.

To represent the society, students do not have to make only tangible artifacts, they are free to create digital visuals as well.

“This year will be very similar to the one done last year,” Holloway said. “However, I’m allowing them to demonstrate their civilization by video or a performance if they choose.”

With time permitting, prior to the final presentations, there may be a debate to see if each group’s civilization can withstand the “test of time.”

“I’m thinking about letting them go to ‘war’ and debate why their civilization is strongest and their culture is more rich,” Holloway said. “This is how we’ll see if the created civilizations would survive or fall like Rome.”