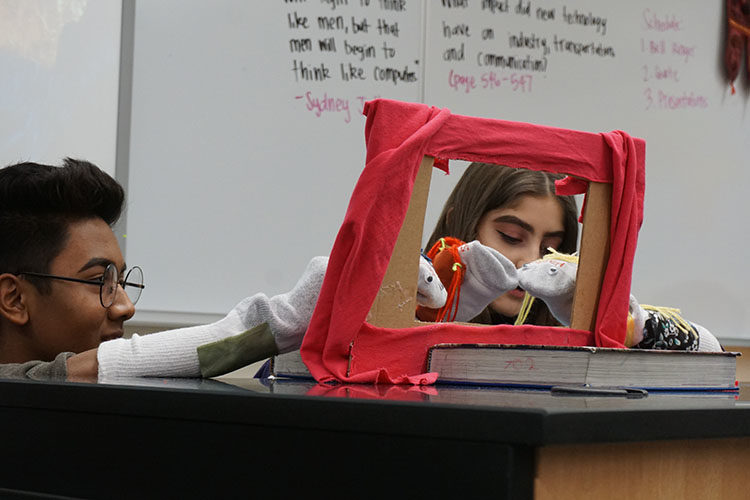 Depicting how a civilization could rise up, sophomores in World History teacher Christina McCoy’s class performed a skit, poem, video or spoken word to demonstrate a hypothetical revolution.

“Brittny and I did a puppet show demonstrating a protest in America, fighting for equality,” sophomore Kianu Nicdao said.

After learning about past civilizations, groups used that information to model their own revolution after.

“We had to put together all the details of who influenced the revolution, where it was, whether it was a real place,” sophomore Kalea Hall said. “My group did a recreation of the revolution of the Dominican Republic.”

Working in pairs, students had free reign over the medium they would use to present their topic. McCoy encouraged her students to think of unique ideas, and one group presented their conflict through a puppet show.

“I needed them to have somewhat of an experience, whether it was a task or a project and I wanted to do something where they had a choice over what we were doing, as opposed to a written exam,” McCoy said. “We had already done artifacts and written essays, but we hadn’t done performances.”

With only a week to complete their presentation, the majority of groups worked on the assignment outside of class.

“It made me think a lot of things, like how much power you’d need to make a change big enough to be called a revolution,” sophomore Kalea Hall said. “Also, why were so many revolutions necessary? Why did certain people have more affect on revolutions than others? It kind of makes you proud in a way that we as a people (not just in America) could stand together to make such a big change.”