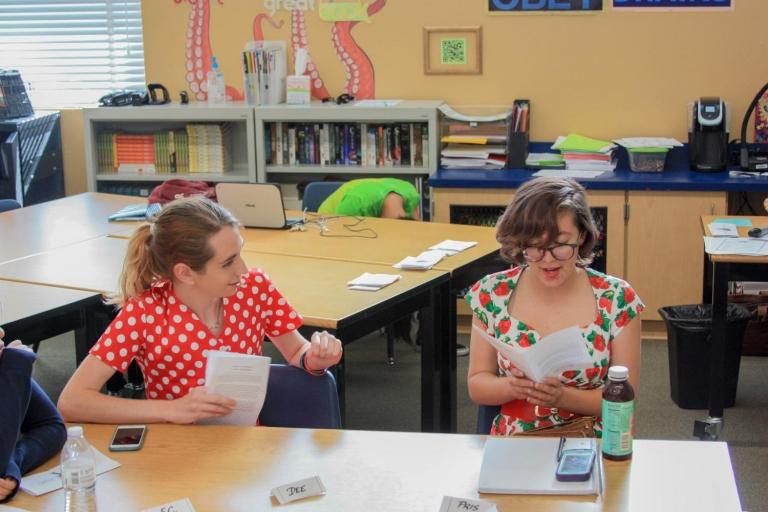 Starting on the second round of the game seniors Ky Elder and Halle Thayer read aloud their clues. The two worked hard to figure out who the killer was before being told. "My favorite part of the game would have to be when everything was starting to become sort of chaotic," Elder said. "We started accusing each other of the murder, and jokes were being tossed around. I had a blast playing it and I would absolutely do it again." Photo Credit: Jackie Romo

“For this Halloween event I hope that students takeaway that it can be really fun to read,” Yoder said. “I also hope that their critical thinking skills are better after only having some of the information and making good guesses.”

The game had a total of four rounds, each one containing a new set of hints to help lead to the murderer. In order to move on to the next round, each group had to make an accusation against someone. At the end of the game Yoder revealed to everyone who the killer was, their motive and when they did it.

“I really liked how during this game everyone was really getting into character,” senior Mia Ordonio said. “Everyone was accusing each other and getting so defensive, it was a lot of fun.”

Since this particular game’s scenario took place in the 1950’s, students were prompted to dress like the characters. Five extra credit points were awarded to those who dressed up.

“I thought it was really cool and nice to see people dress up for extra credit,” senior Jaslyn Hak said. “Their clothes really represented the time period.”

Last year, Yoder presented this game during class; based on the overall satisfaction, she decided to do it a second time.

“I played a similar murder mystery game last year and I really liked it,” senior Danny Maksimov said. “I like how everyone gets super intense and starts accusing others. It’s also a lot of fun being a part of a group with people that you don’t really know but throughout the game you have so much fun solving the mystery.”