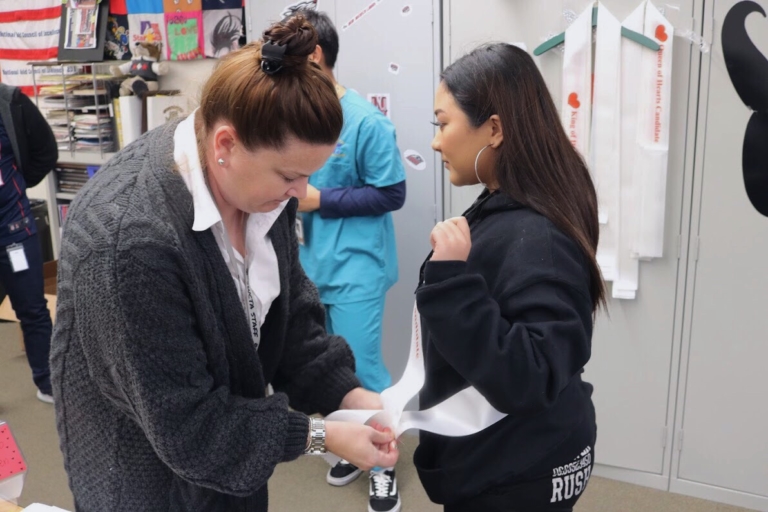 After explaining the rules, Student Council adviser Miriya Julian helps senior Hanna Mae Imperial with her sash. After the fundraiser, Sadies is planned to be held. “We changed back to Sadies, because most people who wanted us to do the Winter Semi-Formal graduated,” Julian said. Photo Credit: Grinesa Bajrami

As a way to donate to the American Heart Association, the annual King and Queen of Hearts fundraiser and competition has begun. Following the fundraiser, Sadie’s will return and be held on Friday, Feb. 22.

“We’ve been doing King and Queen of Hearts [for] four years now and it’s basically a week long miracle minute to raise money for the American Heart Association,” Student Council Adviser Miriya Julian said. “Not only does February have Valentine’s Day, it’s also Heart Health Awareness month and so we use that as a way to fundraise and donate money for heart health. It also allows winning clubs to get bragging rights and it costs no money for those participating.”

The King and Queen of Hearts fundraiser is a competition between nine participating clubs. Each club has selected two members, one male and one female, to participate and collect change for the American Heart Association. The winning king and queen has been given a sash and a crown. In past years, Polynesian Club, Key Club and DECA have won.

“I chose to participate because it was an interesting way to be involved with the school and a way to be competitive,” junior William Grube said. “I’ve seen others do it, where they have these cool sashes and have fun competing, so I was interested. My club, SkillsUSA, has never won and I want to change that.”

After the King and Queen of Hearts fundraiser, Student Council and Key Club will be co-hosting the Sadie’s dance. Three years ago, there was an annual Sadie’s. However, due to a lack of interest, it was replaced with Winter Semi-formal.

“For years, our attendance at Sadie’s was declining and students wanted a formal event, so we created the Winter Semi-Formal,” Julian said. “At last year’s Winter Semi-Formal, less than 10% of the school’s population attended. Also, many students have come up to me and StuCo members asking for a Sadie’s dance, so we decided to do it again this year, since there are so many people wanting it.”

“We planned for the Sadies to be available to as many students as possible,” Julian said. “It’s $5 so money won’t be a problem and we planned it to be a fun event on a Friday night. There will be multiple snacks and a free photo booth. We wanted to create an event that would maximize the attendance, since many schools in the valley have seen a decline in Sadie’s attendees.”