VIP tickets, Silent Disco added to next week’s Coyote Coachella Tickets will be sold during both lunches or at the door 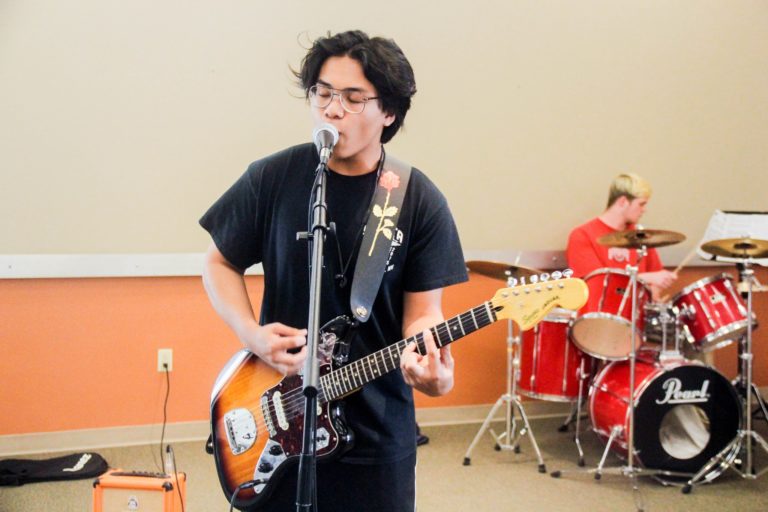 Strumming his guitar, senior Bryce Ramos auditions with his band for a spot in the lineup. Solo and group vocalists auditioned on Monday while students performing dances or instrumentals auditioned on Tuesday. "It was a lot of fun auditioning because the band got the opportunity to run through the songs we have been putting together and preparing for a while, all for a chance to play at Coyote Coachella," Ramos said. "Despite bing our first time playing in front of anybody or even a small crowd, we think we did reasonably well." Photo Credit: Justine Ho

Giving students an opportunity to showcase their talents, Coyote Coachella will return on Friday, April 28. It will consist of events, ranging from a Silent Disco, talent shows and food vendors.

The event is also expected to be held on the field. Last year, the event was postponed due to rain and then moved indoors when it rained again on the makeup date.

“Coachella is an opportunity for students at school to perform their acts or any talents that they have,” senior Madison Drozd said. “It is also a fun way to bring the school together and students can come out to support their friends or watch the talent performances that the festival will offer.”

Last October’s Silent Disco was cancelled, but Student Council is planning on trying again by including the headset-music experience into the cost of the Coachella ticket.

“There will be different events and games for students to particpate in during the event,” Drozd said. “There will even be a Silent Disco area so we will be able to actually try out the event. Also, we will have food trucks such as Blitz Boba and Slidin’ Thru for students.”

Coyote Coachella was also expected to have a male pageant known as “Mr. Coyote.” However, due to only one student submission, it has been cancelled.

“If I was a senior I would have definitely participated in Mr. Coyote,” junior MD Touhidul Miah said. “Maybe if there is a chance next year I will do it, but hopefully there will be more participants to make it possible.”

The lineup for performances is as follows:

“At first I thought it was going to be a nerve wracking experience because I am a vocalist so this was my first time trying to perform a dance in front of people,” junior Francesca Ngo said. “When we got called up it was not so bad because I was able to dance with my [K-pop] club members which made the experience enjoyable.”

Tickets for Coyote Coachella will be sold during both lunches until Friday April, 28 or they can be bought at the door for $5 or $10 for VIP tickets. A VIP ticket includes: flower crown, bubbles, and face paint/glitter tattoo.

“I’m excited to hear the very talented musicians and artists in our school,” junior Rochel Radovan said. “It is my second year attending Coyote Coachella, but I hope this year it will be outside for sure.”