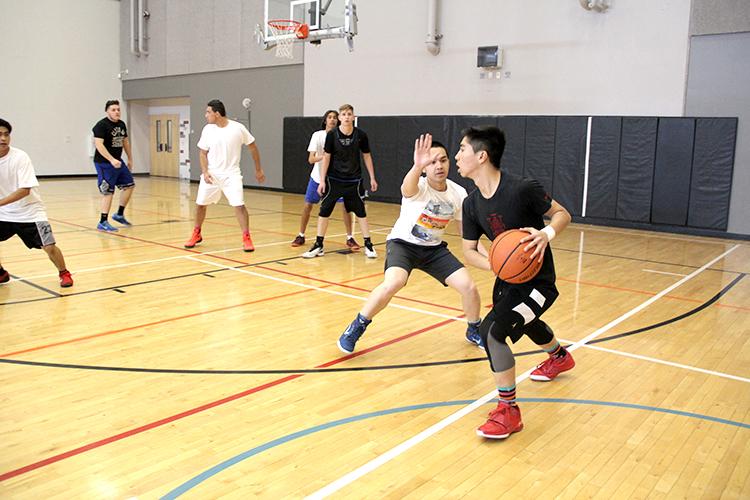 After organizing an opportunity for underclassmen to compete in basketball games, Coach Albert Ocampo and his team of seniors defeated the underclassmen team in a 49-25 victory on March 2.

“The game was pretty fun, but I felt bad because I couldn’t play to my fullest ability,” senior Izeah Guiao said. “The underclassmen were all right. The upcoming game against the staff is going to be a lot more fun because I get to play with the teachers who’ve been there for me these last few years.”

Following the regulation time intervals from the first game against the West Career and Technical Academy Wranglers, the teams played 2, 20 minute halves with an extended break in between each one.

“I believe we can be so much better,” sophomore Joe Regalado said. “It was pretty disappointing. We lost by almost 30. Our talents are up there, but we just got to keep working hard and keep our heads up.”

Students coordinated the color scheme of their attire by wearing black to support the senior team and white to support the underclassmen team, the respective colors of the teams’ jerseys.

“We played like trash,” sophomore Ron Imperial said. “We could’ve done a lot better, and I truly believe that. We’ll get better if we keep working at it.”

While admission to attend the game was free, students could purchase popcorn, candy or water for $1 from concession stands organized by Student Council. Proceeds generated from the game will go towards the funding of school events and activities.

“Now that this is over, we just have to do our best on our own to get better and hopefully, [Mr. Ocampo] calls us up and coaches us,” Regalado said. “We’re going to get much better by being coached by him.”

In the upcoming weeks, the senior team will compete against both a team of teachers and the Southeast Career and Technical Academy Roadrunners.

“I felt that we played well,” senior Brian Lee said. “It was fun being able to play against our fellow Southwest students, and I’m looking forward to playing the [teaching] staff.”