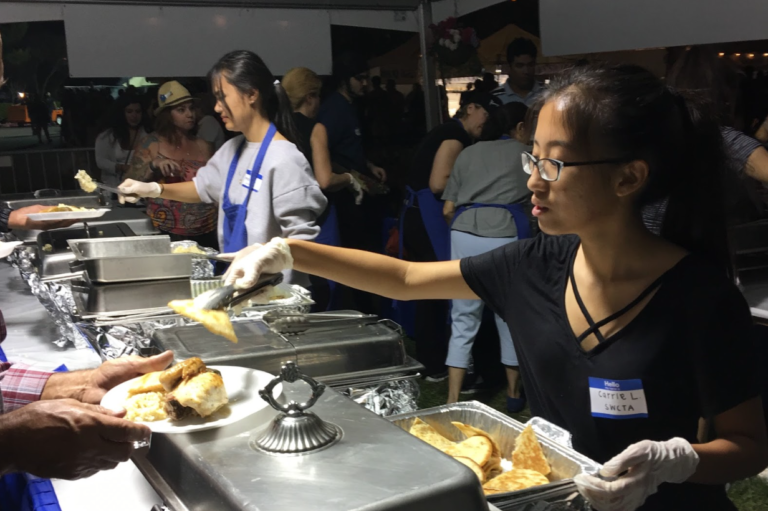 Participating at the festival, sophomores Carrie Lee and Megen Lopez serve food to customers. Multiple students volunteered at the event to earn service hours. “This was a fun and unique experience,” Lee said. “I would definitely do it again to serve the community.” Photo Credit: Jackie Wu

To gain community service hours for Key Club, members volunteered at the Greek Food Festival this past weekend.

Students had the option to choose a shift on on either Friday, Saturday or Sunday. During the festival, participants worked different stations that were assigned to them by advisers.

“Jackie and I volunteered both days together, as we had the same shifts,” sophomore Megan Lopez said. “We did things such as cleaning up trash and tables and serving food to others.”

The festival included Greek cuisine along with live traditional music. Attendees also had the chance to buy raffle tickets to win a 2018 Mercedes-Benz or new electronics.

“There were shops that sold clothes, art and products like honey,” sophomore Francesca Bernardino said. “The booth I worked at served souvlaki, which is a kind of meat, and pita with Greek toppings. Many people were dancing and listening to the live music which was nice to watch.”

“Overall, it was a fun way to get hours. I think it’s a good example of what providing quality service for people is like,” Lopez said. “I would do it again especially because it felt productive and I got to spend time with friends.”