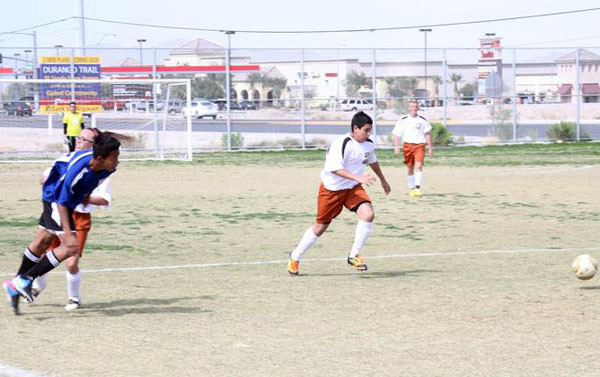 The Co-Ed Intramural Southwest CTA Soccer Team lost 0-5 in their first soccer game of the season against East Career and Technical Academy (ECTA) on Apr. 19.

“I was really hoping we’d win because we practiced so hard, but it’s just one game so I’m proud of my team,” senior Juan Candido said.

Cheerleaders from both schools performed chants on the sideline during the game. The Coyote Cheer Team performed a halftime show, which included tumbling and stunting.

“I’m happy that we got to perform at halftime! It’s always fun to support our team,” sophomore Rachael Kimmich said.

The Southwest Soccer Team has planned extra practices every other Saturday to make improvements for the upcoming games.

“We win as a team, we lose as a team. We’ll just have to try even harder next game,” junior Kenneth Faccinto said.

“As long as my team tries their best, I’m okay with a loss. We may not have won, but we worked as a team and that’s all that matters,” Morales said.

The next soccer game is on the home field at 1:30 p.m on Apr. 26 against West Career and Technical Academy. There are three games this season. The opponent for the last game has yet to be announced.

“I’m pumped for the next couple of games! Even if we lose, at least we’re having fun,” sophomore Zachary Bourbeau said.