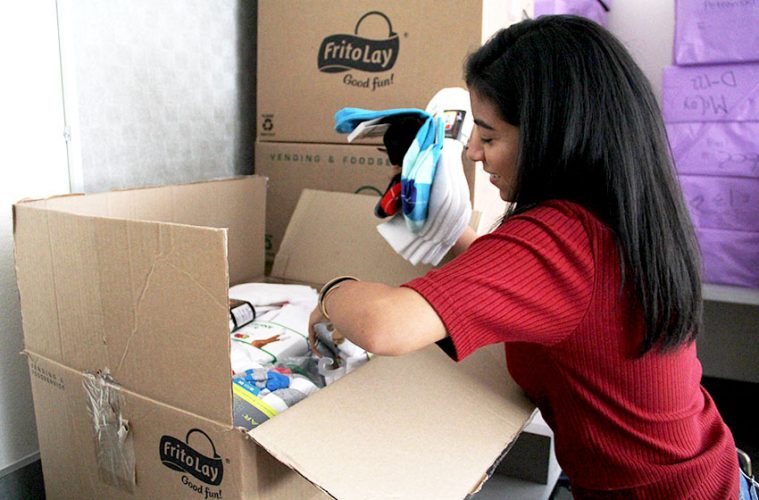 Organizing and counting socks for the Socktober fundraiser, sophomore Karissa Butler does her part in Student Council. StuCo gave each class the same smount of time to collect socks before conducting a final count. "It gives me a bit of hope that there are still good people out there," Butler said. Photo Credit: Cassie Valdez

For the past two weeks, Student Council has been collecting socks for their annual Socktober charity competition between the seventh period classes. Last year’s record of over 1200 donations was broken with this year’s 1503 pairs of socks donated.

“The outcome was hopefully to help people in need and have a sense of community in Student Council, and I think that it was an overall success,” senior Mia Brewer said.

“Not a lot of people think about socks as something to give, but during the winter it is a necessity and it’s something they don’t have,” sophomore Karissa Butler said. “As a school, we can give back.”

The competition included an extra incentive to encourage the students to donate, which was a root beer float party for the winning class.

“I hope these sock donations will make the homeless feel appreciated and that their lives are important and matter,” senior Lindsey Zangler said. “These socks are a small act of kindness of people caring about them.”

The socks that were collected will go to HELP of Southern Nevada, an organization which provides different programs to those in need. The next schoolwide fundraiser will be the Thanksgiving canned food drive after fall break.

'Left vs Right: Brain Games' fails to train your mind