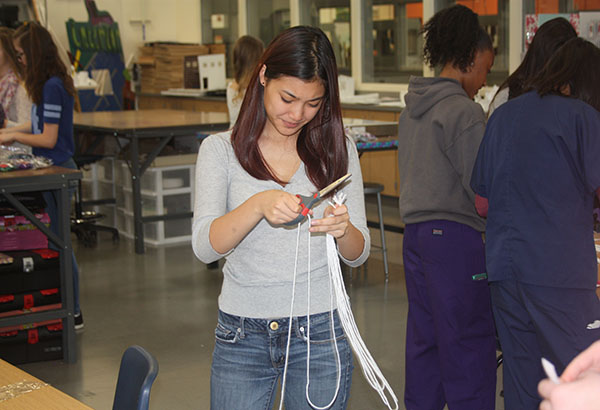 Student Council member Victoria Truong constructs a "Warm Fuzzy" for the activity hosted by Student Council in Feb. The activity's main objective was to celebrate 'Random Acts of Kindness Week.' Warm fuzzies was a really great way for the entire school to acknowledge each other for their kindness so I thought it was great," Troung said.
Photo Credit: Mika Pagado

After a week of campaigning and online voting, the Student Council office for the 2015-16 school year has been elected.

“I’m looking forward to working with the new people joining Student Council! I love to see new faces and see new personalities to bond with. The campaigning process was definitely fun and hyped because just advertising myself means I met new people, and I’m making new friends in such a small way,” Class of 2018 President-Elect Ramsey Gomez said.

“I think the candidates this year worked really hard on their posters and it was a really great election. Congratulations to those that won,” senior Rediet Ayele said.

Students who would like to become an elected member of the council can apply after Spring Break and they will be interviewed in early May. Requirements for the interview are a completed application and participation in the interview process.

“Since an additional section of Principles of Leadership has been opened for next year, I will be looking to fill approximately seven to 12 positions,” Student Council Advisor Mrs. Miriya Julian said.

Incoming freshmen who are interested in becoming a part of Student Council will be elected after the annual retreat in August, where they will have a chance to get to know their peers, class adviser, Julian and the student body officers.

“I’m really proud of everybody who made it and I think they all worked hard this year, including myself. I’m just excited for the new year,” junior Morgan Nogal said.