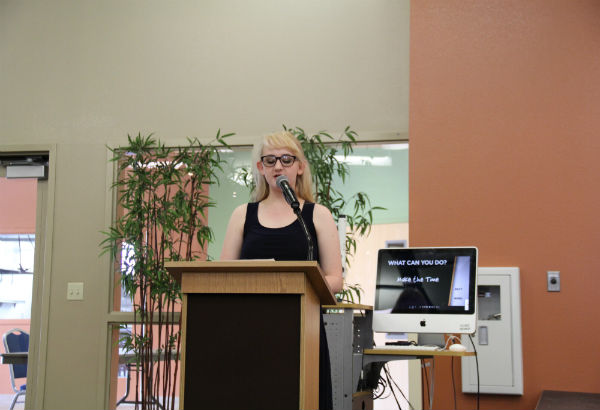 Student Body President Rachel Martinez presented a speech at the Nation Student Leaders Week Luncheon on April 22 in the coyote ballroom. The speech she delivered praised students for their accomplishments in the 2014-15 school year. "I'm really glad we had the luncheon. All the students in attendance did a great job leading and serving the school and community this year," Martinez said.
Photo Credit: Mika Pagado

Hosted by Student Council, the National Student Leaders Week Luncheon took place in the Coyote Ballroom on April 22 at 12 p.m.

“Overall, Southwest was extremely successful this year and is committed to a larger success in the years to come. A large portion of these achievements include community service and there is nothing more important to leadership,” Student Body President Rachel Martinez said.

The event praised students for their leadership, activities and their achievements throughout the 2014-15 school year in honor of “National Student Leadership Week,” which takes place from April 19-25.

“The luncheon was a great chance to have all of the student leaders come together at the end of the year to celebrate what we have accomplished. It was especially nice to talk to and connect with other leaders from organizations you may not exactly interact with daily,” senior Sabriya Said said.

The luncheon, which was attended by administration, clubs and career and technical student organizations (CTSOs), was paid for by the administrative team. The last National Student Leaders Week Luncheon took place two years ago.

“The third or fourth week of April is designated to the ‘National Student Leadership Week’ and Student Council decided to put on a luncheon to feature all of the clubs and CTSOs on campus, along with print and broadcast journalism,” Student Council Adviser Mrs. Miriya Julian said.

Students were served by the junior culinary class. The meal included a salad, pasta and dessert.

“The food was delicious, but above that, I think it was a good chance to see what young leaders are doing and how we can influence society,” junior Joseph Harvanek said.